I am a huge fan of technical innovation in the running space and I am genuinely very excited to see the amount of new products that are coming to market as of late. To that extent, I have spent the last several weeks with a new product from Lumotech called simply, The Run. Its goal is to provide an extra layer of data on top of your normal running metrics including detailed analysis around foot cadence, bounce, brake, drop, and rotation. They overlay this with in-app coaching functionality that offers real-time performance updates during your run. After putting some real time in with it, I’m excited to report back my findings.

The Lumo Run itself is very simple and if you have used one of the earliest editions of the Fitbit or even a normal pedometer, then you’ll be familiar with the size and how to mount it. Starting first with the packaging, it’s clear that everything is very well-designed from a consumer perspective. Inside the package you will find the unit itself, the silicone rubber sleeve that you use as the clip, USB cable, and instructions. They did a really good job with the simple quick start guide where each step and a description of functionality is handled by a specific card, almost like a deck. One of the biggest consumer problems with very technical data around running is that it’s too complicated, this seeks to simplify it a bit and makes setup and understanding it that much simpler.

The unit itself is about 2 inches long by 3/4″ of an inch wide. On one end is a small door that exposes the USB port. Other than that, the only other visible element is a small LED which indicates status. Once charged, you remove the Run from the cable, close the cap, and then insert the Run into its silicone sleeve. This entire process takes maybe a few seconds and honestly the entire charging process went very quickly. The stats from Lumo say a full charge takes two hours and the battery should last for about 20 hours. I found this to be more than reasonable and did not feel like I was ever out of juice. On top of being fairly small and innocuous, the device is actually pretty hardy as well. They made it waterproof up to a meter and I can personally attest to the washing machine claim as I was one of the ones who forgot to take it off.

So here we have this little teeny device coupled with a silicone-based belt clip and that’s it. You can just clip it on, go for a run, and even leave your phone at home, but that’s not how I would recommend using it. I tried it both ways and I would definitely fall into the camp of having your phone with you when you’re running with the device to get maximum benefit.

Alright, so how does it work you might be asking yourself and how is it going to help me? I’m actually just going to skip the part where you decided to bring your phone with you. Honestly the benefit comes with the coaching aspect happening in real-time allowing you to make micro adjustments to your stride, cadence, body position, etc. While some pro runners might not like running with their phone, most average consumers can tolerate it and the value outweighs not having it.

To start a run, you attach the Run in its sleeve to the rear of the waistband of your shorts (tights, pants, whatever) in the rear center. There are no buttons on the device at all and you will not need to touch it. Next, you open the app on your phone. I’ll assume you have already connected the device via Bluetooth going through their set up prior to being in the middle of your run just from a pure best practices perspective. To start your run you click the large plus button in the app labeled “New Run”. After a countdown (which you can disable) your run is started. From here the app works like a normal tracking app and starts tracking your distance, pace, etc. all through GPS. Note, you can send it to the background and it will continue to function properly. It will also work if you are listening to music and pauses appropriately. A few seconds later you’ll be greeted by a friendly voice who walks you through your focus for today’s run.

As we get a little deeper and talk about the actual in-run functionality, I do have to point to the simplicity of the device in general. Much like the original Fitbit having something you can easily just attach to your shorts that honestly you don’t have to worry about falling off, is really the height of simplicity. It connects via Bluetooth very quickly to your phone when you’re using it and for the most part it’s ready to go well before any GPS watch we tested. When the run starts you are greeted by a somewhat friendly yet computerized voice that will outline your focus for this run. The app is smart enough to identify pain points in your stride, posture, etc. and target your workout to these trouble spots. This becomes the crux of the workout and this will be the feedback you get for that particular run. Your next run might find you working on a different trouble spot or the same one again depending on your improvement, this is all controlled by the app. You do have the ability to switch this and re-target it there something specific you feel you need to focus on, but we let the app do the work for us in terms of the selection process.

So now you’re in run, your robotic female voice has introduced you to your focus for the day, let’s say Bounce in this case and you will have a target goal. So if your typical bounce is around 4.1″, your goal might be to try and achieve a sub 4″ target throughout your run. In this case, my target was 3.8″. To get to that spot, the coach will give you small pieces of insight around how to maintain this including keeping a steady horizon and avoiding any sort of bobbing. This works fairly well for the most part and I found that it did give me additional insight I had never considered before in terms of how to improve on specific areas. The next piece is feedback and this is how you know whether you’re achieving your goal throughout the run. You are given audio cues for good and bad performance via a positive tone if you are hitting your target and a negative tone if you are not. It’s very clear which is which. I did find the intervals in which these were presented to be a little odd; sometimes they come quite often and other times they disappear for several minutes before showing up again. I am honestly not sure what triggers a positive or negative tone, and sometimes this can be annoying as they come quite frequently. Also a negative tone is typically met with a very quick subsequent positive tone because you are self-correcting given the negative feedback. That being said, it does a good job though of informing you when you were doing something right and wrong.

Here is a shot of the kind of data from the app side: 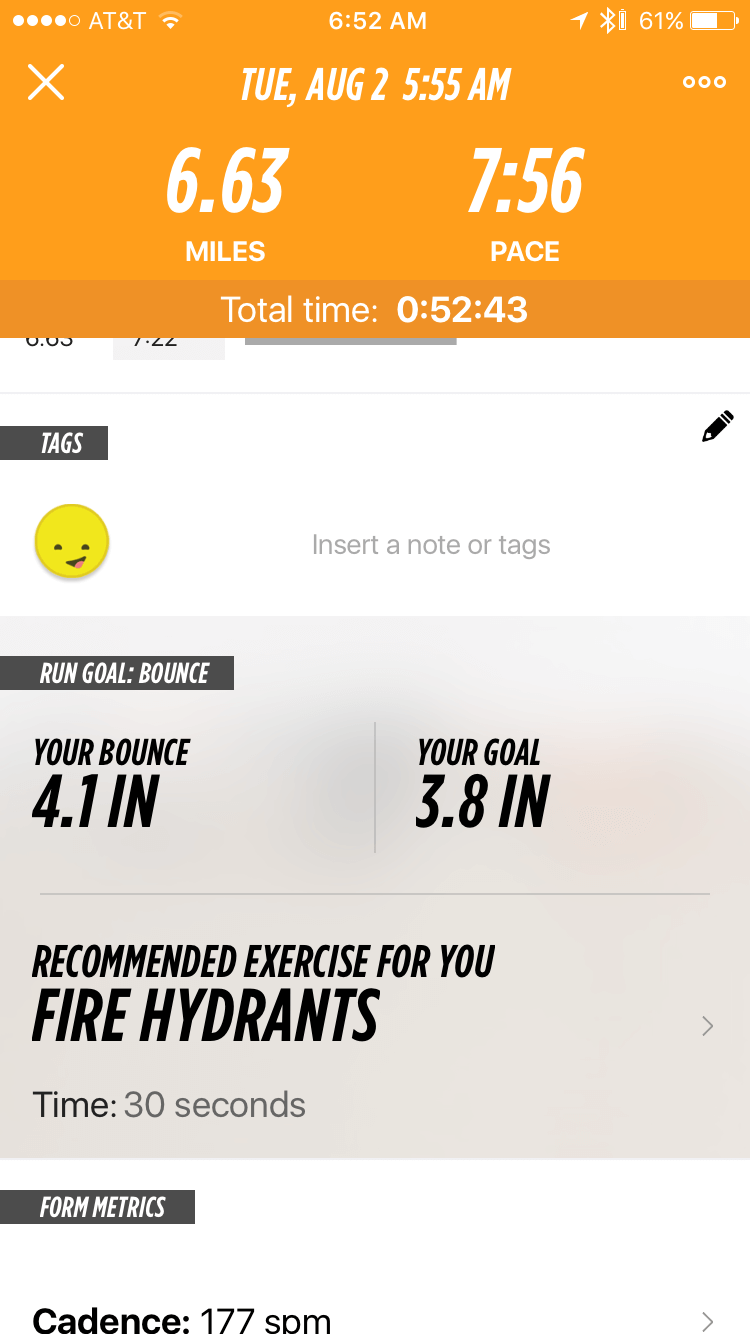 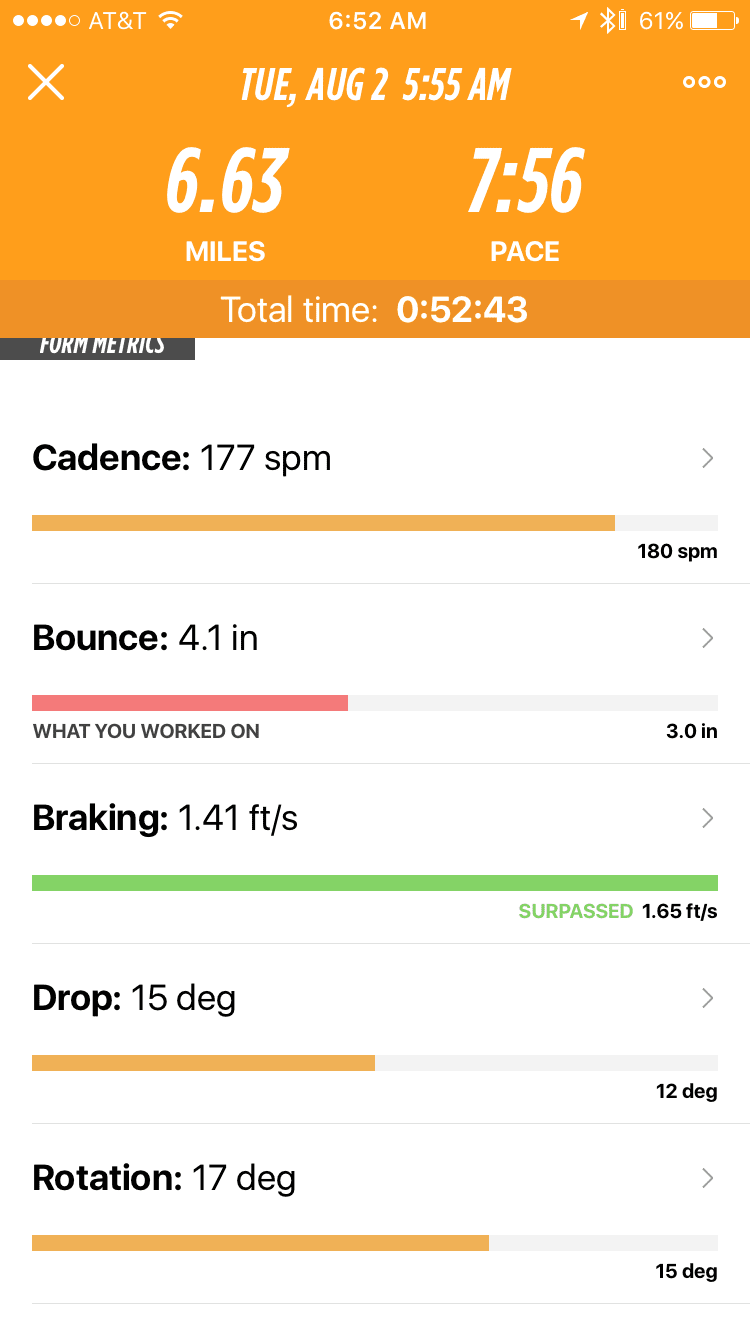 Along the way, you are also given general feedback in terms of posture and running. These aren’t necessarily specific to your goals for the day, more like best practices. These are items like rolling your shoulders back and down, keeping your core tight, maintaining the distance between your knees, increasing cadence, etc. I found these to actually be very helpful and run to get myself to refocus especially as the miles add-on and your legs become a little more rubbery and less focused.

The app itself is very basic at what it does. It has your staple GPS, splits, and this bubbles up into the coaching experience and you get triggers for distance run throughout. The real core of the app is in the reporting obviously and this is probably where you find the most interesting data. Here you can see, for each run, how you’re doing against the six primary categories and simple color indicators show you how close you are to what is considered better than where you started. The app itself is fairly sparse, but the data is all there so I would expect to see improvements on the outside that would give you more detailed aggregate data information. This includes performance over time for specific stats and maybe ways to slice and dice performance against distance against a given set. Overall it does a good job but my trouble here is always the fact that you have to run yet another app and that this data is very specific to Lumo, so you won’t be able to integrate it with another set of data say your Garmin, Suunto, etc. I would still love to see a place where all of this data is bubbled up into the same big report.

Here’s some shots of the general run history views in the app: 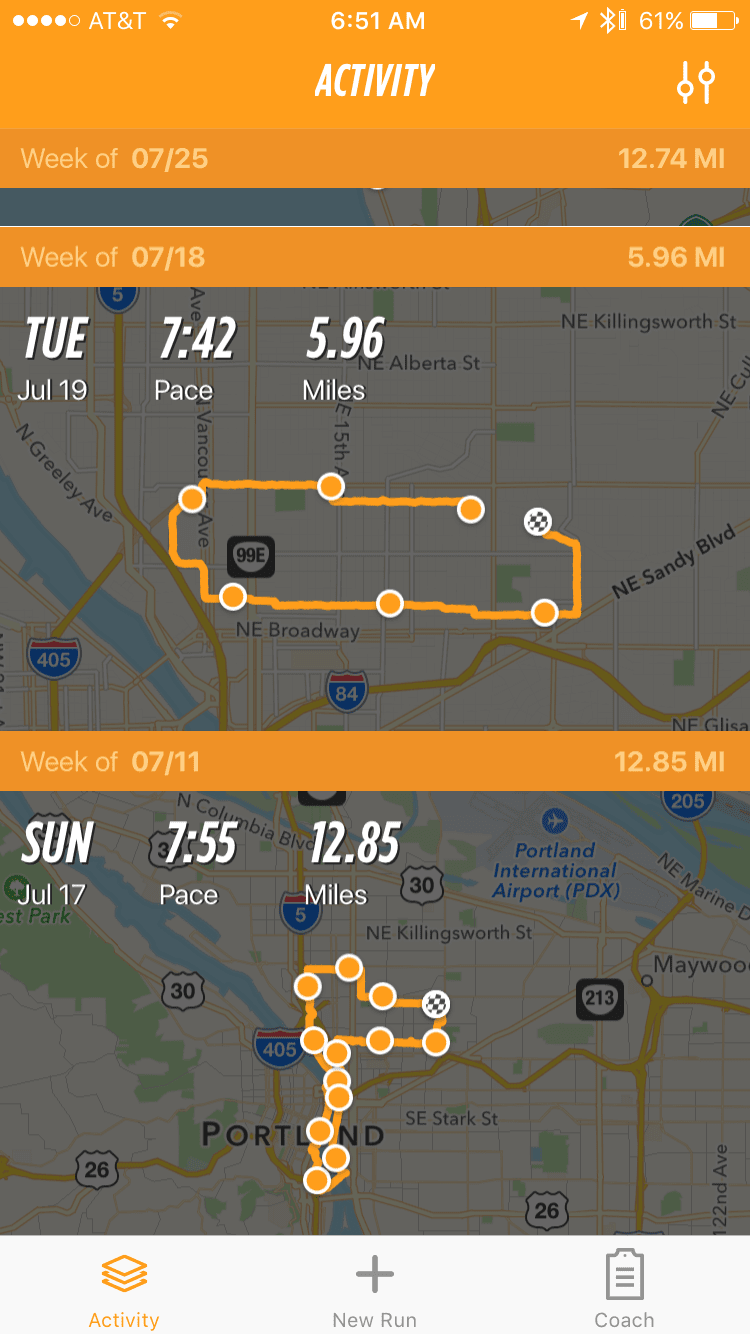 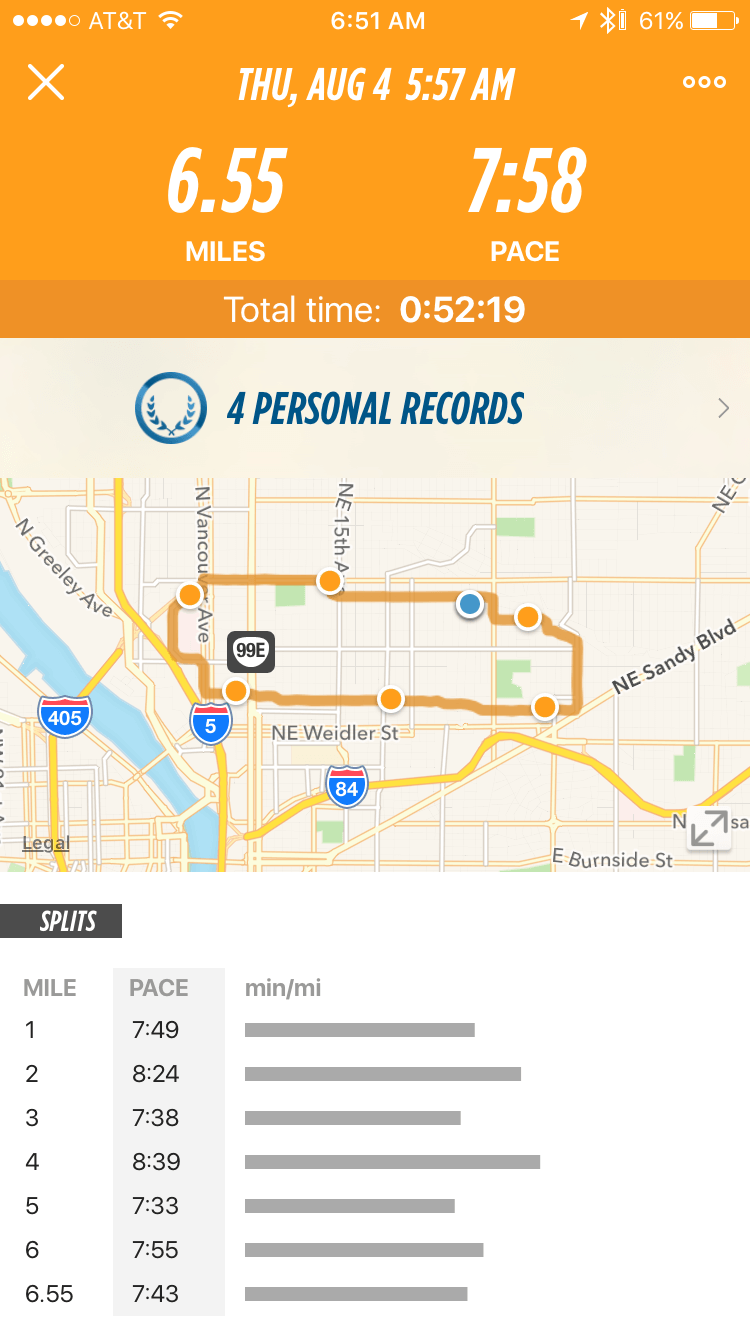 Overall, I think the Lumo Run is highly successful for what it does. As a total data head, I love the granularity and additional data it can provide over the top of what’s out there. I think the app in general is great place where you start to see some really interesting things about your performance from a true statistical perspective. I also find the Run to be super accessible for recreational runners even though it’s about analytics. The reason for this is that the device itself is super simple to include in your runs and the data you get while you are in run is incredibly valuable because it speaks directly to body position and form, its not about the minutia and its actionable. There are obviously some other layers in the app including workouts and stretches which will be useful to recreational runners, but the fact that the coaching is so consumer friendly is pretty awesome. At a price point like this, it’s definitely something that all runners could benefit from and might enjoy trying. If you really don’t want to run with your phone, then I think you miss the benefit here, so something to keep in mind, but overall I would definitely recommend people checking it out.