We have had quite a few Mizuno models roll through the office recently and I was probably most excited to check out the new Wave Rider 20. The Wave Rider is one of the oldest mainstays in the lineup, it has quite the loyal fanbase. I was coming in as newcomer to the model with my only experience being other Mizuno shoes I had tested prior like the Enigma or Catalyst. What drew me to it really was its consumer/recreation target featuring decently low weights, mid level cushioning, and of course… styling. Of course the big questions are all about fit and performance, but let’s dive into construction first.

Mizuno is very classic in their design. Plenty of sewing in the uppers and again they put a lot of their overlays underneath the engineered AIRmesh. From a visual perspective, this gives it a very cool look. I do wonder if it affects breathability but have not noticed any issues to date. The heel collar is updated as well and feels very soft, while still holding you well in place. The upper also uses their patented DynamationFit which is a design blueprint based on biomechanics that should give you the best experience across your entire gait.

The mid is composed of U4IC which is Mizuno’s unique midsole compound designed to provide comfort and perfomance, while also being lightweight. They also included a heel wedge composed of their next generation which is supposed to return higher rebounds and increased levels of cushioning (happy heel strikers out there) as well as their SR Touch for even more cushioning in the heel. They also have full midsole ventilation so it should breathe well throughout.

The outer is composed of EVA and X10, the Mizuno version of durable carbon rubber which decreases wear over time. It also uses their SmoothRide system which is supposed to aid in acceleration an deceleration.

Something about the Orange (Clownfish) and Black colorway really called to me whether it was the changing leaves here in the Pacific Northwest or the fact Halloween was days away when I took my first run. If you don’t love the brightness of this design, then they have two other color options that are more subdued that will definitely strike a balance. Mizuno did a really nice job having a well balanced palette here in creating something for everyone. Aesthetically, I really liked the profile of the shoe and the 20 logo under the inside heel mesh, nice subtle little touches that made it feel much more premium. The addition of subtle reflectively elements make this really attractive underfoot. 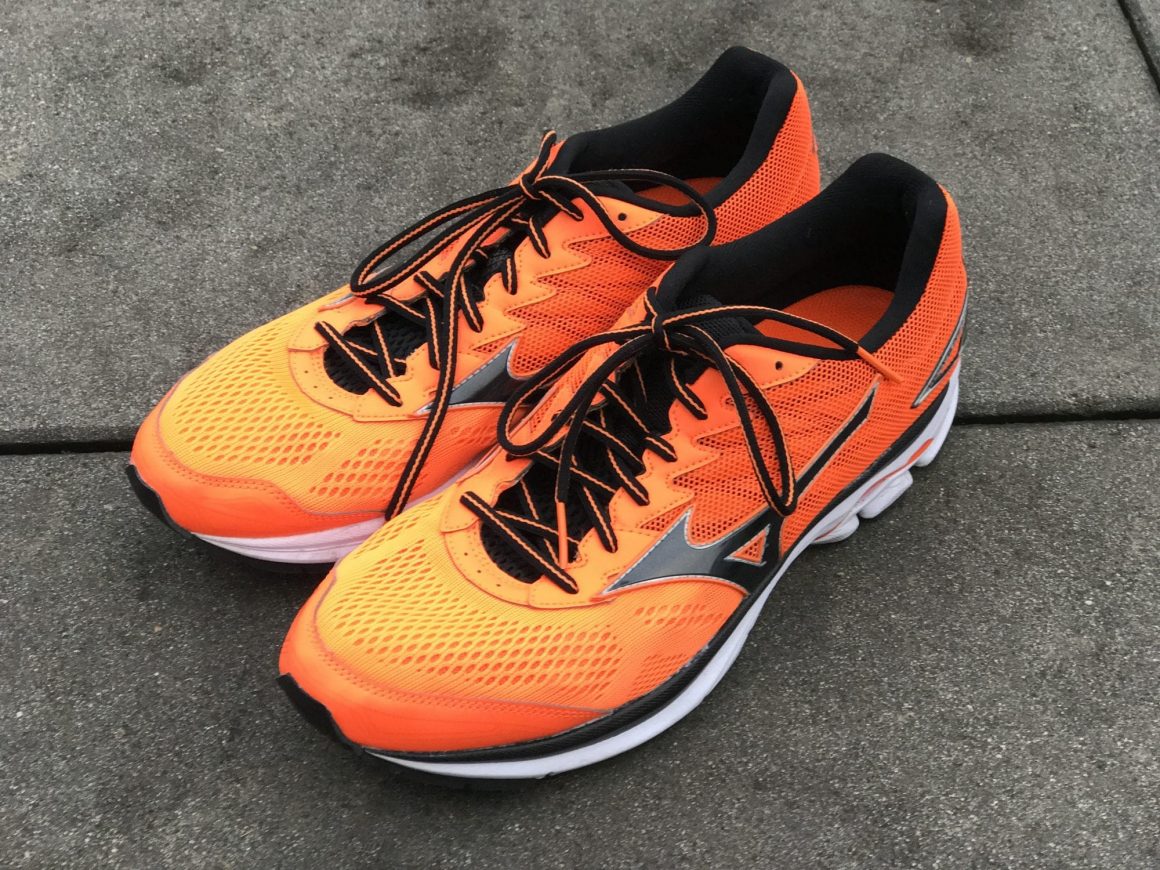 Let me start off with a simple statement, this is definitely my favorite Mizuno to date. From the time it went on my foot, I knew I was going to enjoy it and the in-run never let me down. This is an all around solid shoe and there is a good reason why we are 20 revisions in. Its quick off the front, accelerates and decelerates well, and also has a nice transition area for heel strikers.

During low mileage days it turned in decent numbers, it never felt heavy and I could maintain my cadence well primarily due to the weight and rebound of the shoe. On longer days, my pace would climb slightly, but again I did not feel like there was a lot of effort involved in terms of pace control. My foot remained comfortable, the shoe breathed well, and I noticed minimal resistance from the shoe itself.

On the negative side, I do like a more natural toebox. Mizuno in general seems to have widened the overall box at the base of the toes which obviates a good portion of toe splay issues, but it could be more as there is definitely a little resistance on the outside edge, namely your pinky toe area. The drop is also fairly high which has always been a nitpick of mine as it makes it more of a heel striker shoe, but that’s really what this is… a solid consumer running shoe. I can’t knock it all that much, but this shoe with some weight reduction delivered at a 5mm offset becomes a professional race shoe… and it would fly.

I said it before, but just to reiterate it here, this is the best Mizuno I have run in for neutral, consumer or recreational road runners. The combination of weight, breathability, and offset means very solid performance and it competes well across similar manufacturers like Asics, Brooks, Saucony, etc. Its not crazy visionary using cutting edge technology, but it definitely delivers what you have come to expect and if you are a Mizuno Wave Rider fan, its a definitive upgrade. If you are considering trying a Mizuno shoe, then I would probably point you here first.

The shoe also comes in a GTX model as well which is fully weatherproof.