Alright, we were really pumped about this next one because this shoe represents an almost fundamental shift for a company that has long produced shoes that follow a fairly specific model. That company being Saucony and the shoe in question is the Freedom ISO and it’s definitely a first of its kind. Now don’t be scared, this doesn’t mean Saucony won’t keep producing a very broad shoe lineup, but instead have accented their lineup with something entirely new for them. It uses many Saucony technologies that you’re familiar with, but it’s kind of a different beast from anything we’ve tried before. It’s like they took the shoes normally designed for racing like Kinvara and merged it with their recreational runners like the Triumph. We don’t want to spoil the rest, so off we go. 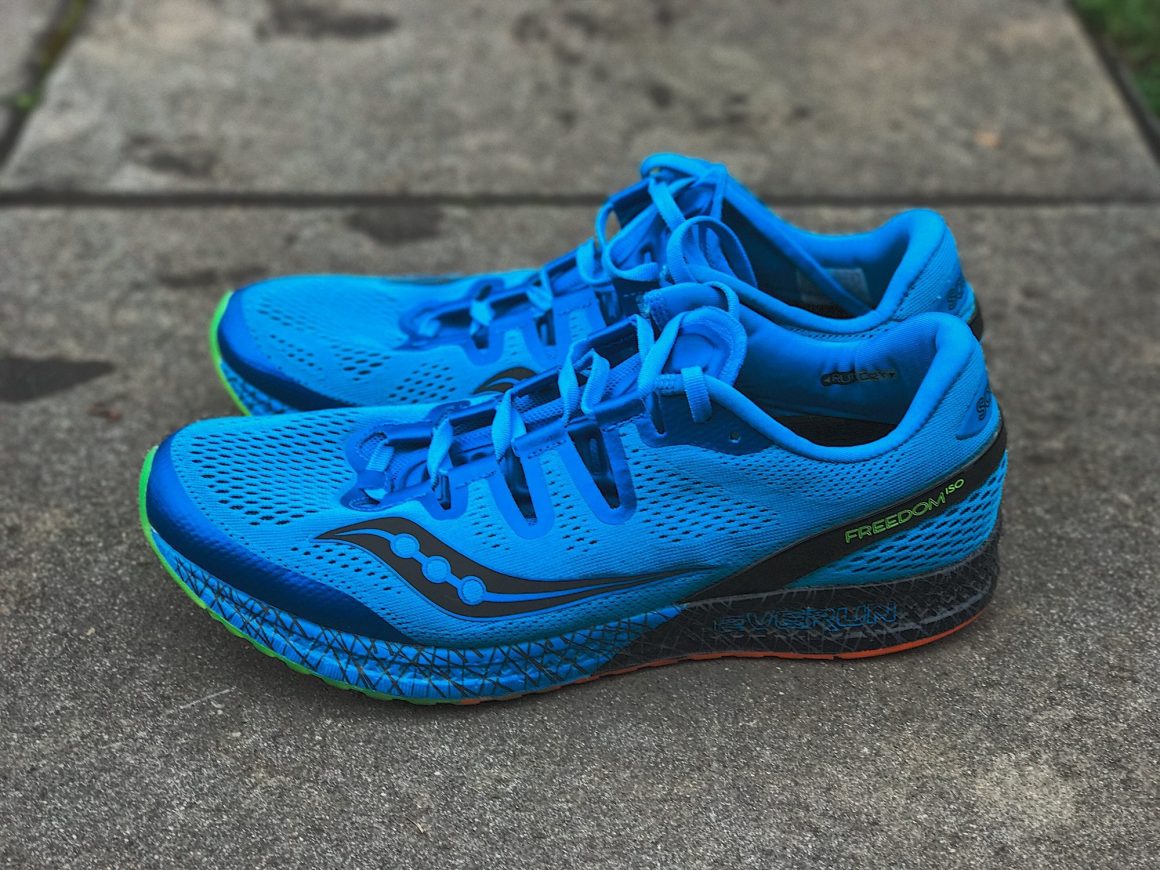 To start off, I can say I have never felt a Saucony shoe quite like this. It makes use of their ISO-Fit system across the entire upper. This creates a sock like experience where the shoe hugs your foot very snugly. It is also super light, has very minimal stitching and the only real overlays are around the lacing system. That to has been redesigned and the typical hole based eyelets have been replaced by vertical reinforced in and out points. The tongue has also been reduced in size and weight and again contributes to a very flexibility and light upper.

Probably the biggest selling point for the Freedom ISO is their move to a full EVERUN mid, so instead of isolating a particular section of the shoe and inserting the EVERUN, it literally is the entire mid. This is really an experiment of sorts and the idea is to achieve a continuous level of cushioning throughout the entire shoe. This also leads to a certain amount of feel and responsiveness and the 4mm offset is perfect in this shoe. The 19mm stack height also provides ample cushioning so it’s designed to compete as a fairly solid mid-cushioned neutral runner.

The last change is the addition of the TRI-FLEX crystal rubber outsole. I literally have no idea what “crystal rubber” is, but I can tell you it grips and tracks very well. It also seems fairly durable and the wear has been very very minimal. The mid/out combo in general feels very well though out across the board. 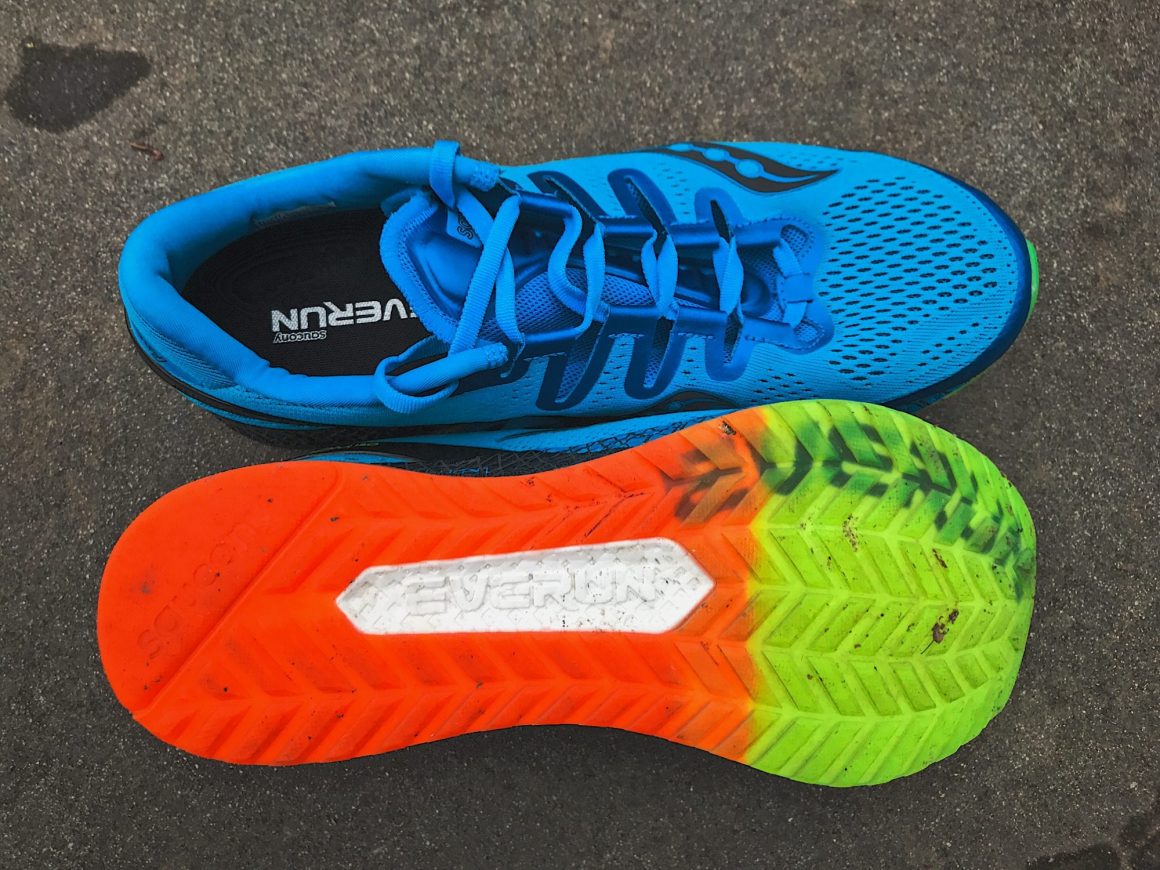 As with many “first” shoe models, the Freedom ISO came in only one colorway originally, a teal blue with some subtle accents in the mid. The body construction is appealing and is a mix of fabrics and technologies which gives it a very thought-out look. They have added two additional colors since the launch including an all black and a red as well, all three of which are solid visually.

I didn’t really know what to expect from the shoe itself in terms of performance, but initial feel was very comfortable. Kind of a barely there feeling in the all mesh upper, then mixed with a sock like fit around the collar and lacing system, it was just something new. The first few runs however cleared things up really quickly and by fast I mean the performance. They were quick, responsive, and comfortable. The Freedom ISO eschews the typical 8 to 10 mm drop you find in most runners and instead offers a 4mm offset. The stack height coming in at just shy of 20mm gave me ample cushion and more than enough responsiveness during toe off.

My first middle distance runs were in the 6 to 10 mile range and were roughly 20 seconds faster than normal with little to no change in stride or effort. I wasn’t forcing myself and I was getting more from the shoes which is always a great feeling. The flexibility in the upper is very high giving you a lot of wiggle room for your toes. At half marathon distances and more, the cushioning provided from the EVERUN mid was more than ample. However, I would still like a little more width in the toebox area and if you’ve ever read a review on here before, then you’ll know it’s a recurring theme. The Freedom ISO does provide more room for splay given its flexibility, however you’re still limited by the footprint in many ways. It is better than most in this department though and is also better than a lot of other Saucony shoes we have tested.

One thing I did notice is the weight and it’s not a heavy shoe, but the 9oz is really odd to me. With a shoe that has barely any upper, then it’s clear that the mid or the materials in the outsole are probably quite heavy. Maybe even heavier than it needs to be, so it’s still a recreational shoe and my legs loved the additional cushioning, but I just found it to be interesting they put so much weight in the mid.

As I wrap this up, I find myself doing a little bit of questioning in terms of target market. I definitely feel like it’s a “bridge the gap” sort of shoe. So where I see this fitting in is for you runners who are more recreational in nature and looking for a faster shoe for those speed days. Also for those looking to inevitably migrate into faster shoes where faster means lighter and more neutral and with a lower offset, then this might be perfect for you. You save a few ounces weight wise, you get the flexibility and responsiveness from a race shoe, but it still got enough heft to get it to act like a cushioned recreational runner.

I really did like the shoe overall and in fact it’s one of the best I’ve tried this year. I love that Saucony is branching out from their traditional lineup and using their existing technologies to produce alternatives that bridge market segments. I definitely think the Freedom ISO is a great way to kick off the year.

HOKA ONE ONE Hupana Review

HOKA ONE ONE Mach 4 Review