There is something about testing waterproof running shoes that I just love. I think it’s that whole will it actually keep my foot drive as I dunk it in water and take it out in the harshest conditions mentality. Pushing the shoes beyond its limits to see if I can if it will really live up to its hype is what I live for. There is also part of me that loves testing out a new brand and in this case we have the best of both worlds, the Salewa Ultra Train GTX. This is the first review we’ve done of a Salewa shoe on the site and we are excited to see what was in store for us. So off onto the muddy trails we go! 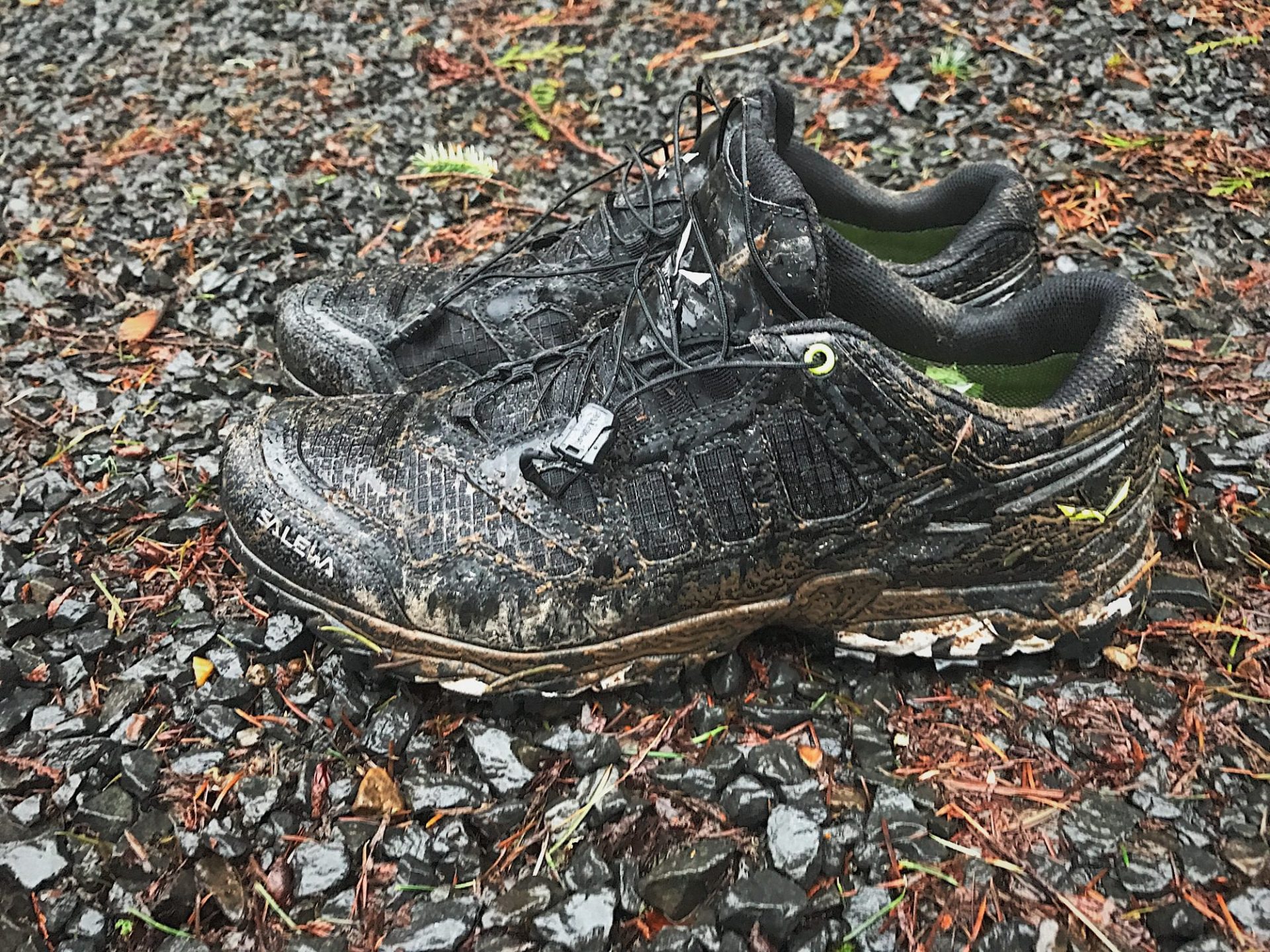 The upper on the Ultra Train is made entirely of Gore-tex (hence the GTX). There are also a number of overlays, a reinforced toe, and a decent amount of seaming. The lacing system is a drawstring with a lace pocket so you can stow excess laces during a run. The shoe holds you pretty well and you can achieve a decent lockdown with the lacing system.

The mid uses Salewa’s Motion Guidance technology which essentially refers to how they adjust the mid within the outsole to better support natural movement. Essentially, they try to match the layout of the EVA within the mid to better match the way the foot works. The hope is that this increases stability over time.

The outsole on the Ultra Train GTX is a Michelin (yes the tire company) based performance outsole. This was built on conjunction with Salewa and features specialized grooves which should repel mud and water while increasing traction and stability.

I’m not entirely sure how to assess the styling on this one. It looks mean in many ways and almost bulletproof in its design, dare I say bada**. It comes in two colorways and we tested the all-black version with the subtle black-and-white mid outsole combination and it visually looks tough. The all-black actually does its job better in nasty conditions given you have to worry less about discoloration on an all-black shoe. It also bears a lot of similarities to many of the Salomon shoes, from the lace pocket and lacing system to its side profile.

First impressions out-of-the-box were a mixed bag. I struggle to some degree with utility on the Ultra Train GTX and that while it works really well as a waterproof shoe, I would probably see it more as a fast hiker or a really slow trail running shoe. The reason for this is primarily due to the amount of firmness in the upper and stiffness in the mid and outsole. It doesn’t track like a running shoe, but succeeds very well on hills especially climbs much like a hiker would. The lugs aren’t large enough to provide a significant amount of traction, but what there is works as well as most and in dry weather it works very well. In really muddy and slippery conditions at speed, I noticed it can be a little treacherous.

In run, the firmness never really subsided even after multiple wearings so the stiffness is a built in function of the shoe. This held true for the entirety of the shoe as well, not just the outsole. It does lead to a less relaxed feeling during stride, but again if you slow down and are running at a space in the low teens then it fares much better. You will just not get the toe off you want if you are a speedier runner. That being said as a fast hiker, the shoe does succeed very well. There also isn’t a lot of rebound or softness in the cushioning of the shoe, which again lends itself better to pay through hiker type shoe.

The main feature we are looking at here was the waterproofing and the Ultra Train GTX does a phenomenal job of keeping water out. I literally went through a downpour including puddles and came back with dry socks which is almost unheard of. So while I struggled at speed with the shoes from a running perspective, as a fast hiker/slow runner it functions well and for the waterproofing perspective it gets an A+.

This was my first look at the Salewa lineup and the Ultra Train GTX in particular, I would definitely categorize the shoe as a slow run/fast hiker with a shield on it. There isn’t a lot of cushioning in the mid and the shoe is stiff throughout which again lends itself better to hiking, plus its got a little weight on it. It does cradle your foot well and keep the water out really really well, but you will not be racing in these shoes unless your feet are bulletproof. I did think they looked mean and tough and I loved slamming them into the puddles to see how they would respond and in that they didn’t disappoint.