Alright, the Clayton is back and as much as we loved the first version of Hoka’s first real speed shoe, the Clayton 2 really takes it up a notch. When the Clayton first was released, it didn’t look like everything else in the Hoka lineup. It had a totally new visual design on the upper and was lighter, faster, and more responsive, but more than anything it rounded out their lineup by creating a whole new speed category. 2017 brings us the Clayton 2 and Hoka didn’t reinvent the wheel, but they did make significant improvements to tie this shoe more closely to the overall lineup from a visual perspective while addressing some of the concerns we had on the functional side. 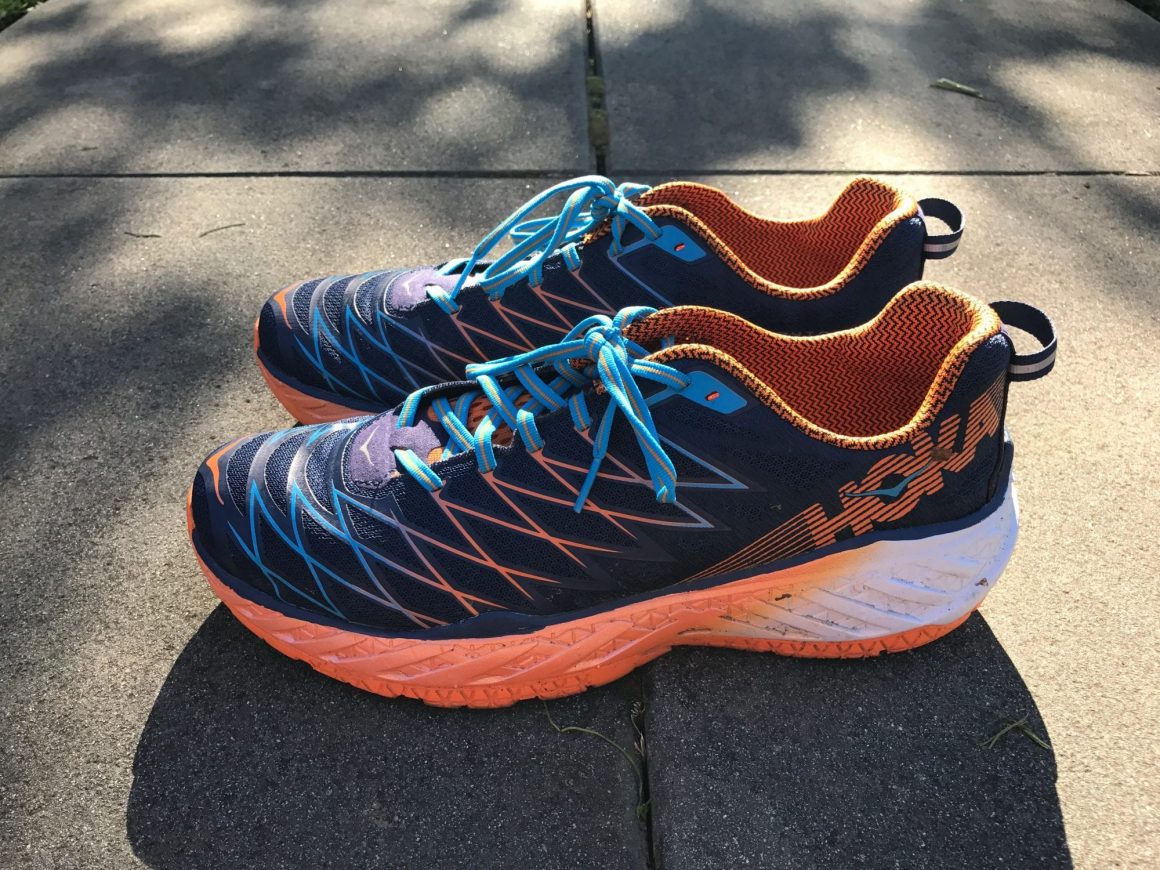 The upper is composed of an engineered mesh, but now features a whole new TPU overlay pattern and this time its functional. The criss cross overlays start at your mid and run the length of the forefoot and are designed to provide some level of additional support to the front of the foot. The tongue also has increased padding which the original Clayton lacked. It also features a new Ortholite insole and the interior has a more sock like fit overall.

The mid really seems to the identical to the original model. It again uses their PRO2Lite dual density design which means a slightly softer heel and a little more firmess up front. This should help with foot transition for heel strikers while also remaining responsive for mid and forefoot runners.

Also untouched from what I can tell, the outsole is primarily RMAT, Hoka’s proprietary blended EVA rubber technology. RMAT is supposed to offer better durability and grip overall, while also providing higher elasticity. I am consistently amazed at how the combination of PRO2Lite and RMAT really just equal more cushion at zero weight increases.

Overall, the Clayton 2 structure and profile design looks like the orignal Clayton. The change comes in the color options, where they offer three colorways for men (blue/orange, bw/citrus, green/blue/black) and women (black/fuschia, blue/fuschia, and white/acid), and the billboard sized logos from the original have been replaced with those subtle overlays. The pattern of the upper feels fast and my only bummer is that the two models they did in collaboration with Oiselle, are female only giving you 5 color options. 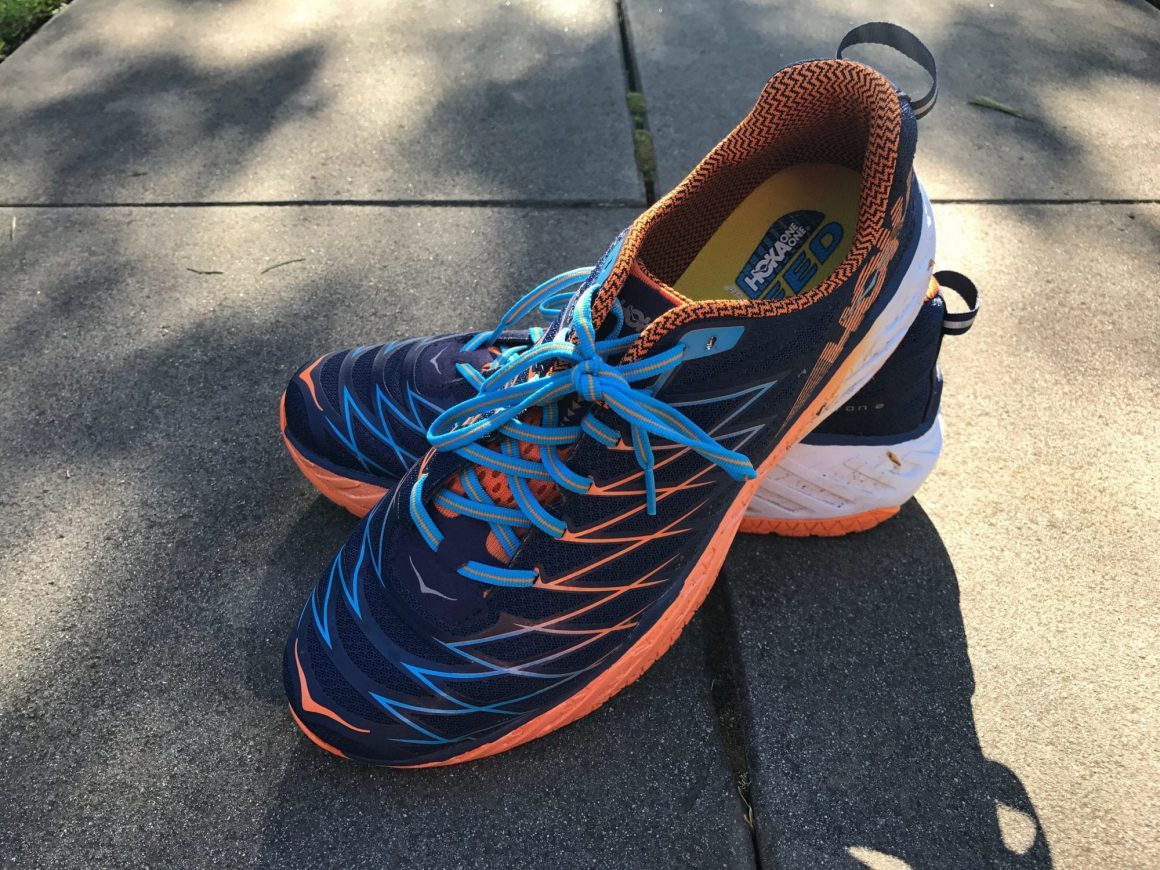 I had run hundreds of miles in the original Clayton including the Rock ‘n’ Roll Seattle Marathon, so I had a ton of experience with them. While the Clifton still remains my favorite Hoka road platform, the Clayton 2 really closes the gap for a number of reasons. First, a lot of the fit issues especially in the forefoot have been remedied. The tapering on the toebox is gone in favor of a wider roomier experience especially on the lateral side, basically all the fifth metatarsal (aka pinky toe) rubbing has been fixed. A little more height has also been added to the toebox giving you plenty of up-and-down roominess as well. The visual treatment got an overhaul as well obviously, but more importantly some very slight structural overlays have been added on top of the engineered mesh which gives you a sense of support and structure across the entire upper without adding any real weight. Note it has gone up a bit in weight, but nothing I would say it is noticeable.

My biggest concern was obviously the actual running experience and given that this is supposed to be a speed shoe, the performance aspect was paramount. I’m happy to say they didn’t mess all that much with that aspect of the original Clayton. The meta-rocker design is still in place, and the responsiveness of that EVA mid is still there, the stack height is identical, and given the light weight your turnover and cadence can remain relatively high. What I notice more than anything is that you don’t have to think about building speed which is what I loved about the original Clayton, it did a lot of the work. Many times, you will actually find yourself needing to slow down because your legs can get away from you a little bit and on shorter distances, sub 10 miles for instance, this is totally okay. At longer distances, I would recommend a little more self-control because the Clayton 2 will see you leaving the gate really fast. You basically need to reign them in which again, isn’t a bad thing.

Honestly overall, this is one of my favorite updates from Hoka since the Clifton 2 was reborn as the Clifton 3. Hoka went through a moment where they reall were missing customer feedback and we saw that with the jump from the Clifton 1 to the 2, but clearly they are listening npw because the Clayton’s move from 1 to 2 and the ATR 2 to 3 are all supremely positive in my mind. They are addressing issues with fit and function and overall feel without sacrificing the performance of the shoe. As always, the Clayton is still slightly narrower than other Hoka shoes, but that is true for all speed shoes for the most part so this is not just a hookah thing. I think that even those with wider feed will adapt to the platform fairly easily and what first might feel narrow will probably work out pretty well after a few runs. If you are a fan of Hoka One One and looking for a quicker shoe for your speed days or overall, then definitely check out the Clayon 2.