In the world of running, there are really two kinds of companies. First, there are the giant manufacturers where everyone knows their name and they produce a solid diverse lineup of apparel, footwear, accessories and more, but then there’s also the niche market. These are the guys who focus on innovation at a non-mass-market level and while the hope is of course to one day be competitive with the larger manufacturers, they don’t want to give up on the values that made them great. Altra Running is one of those companies and while we’ve talked about their shoes before, they have also gotten into the apparel game. We had a chance to sit down and do a quick Q&A with Altra co-founder and StashJack designer, Brian Beckstead, but before we get in that we wanted to give you our thoughts after using it on the trail so first off, a quick review.

The first thing I noticed about the StashJack is that it’s definitely designed for a particular market and one glance will tells you why. You see, the StashJack has no back and to describe this better, imagine a large oval cutout at the center of your back. It’s ideal thought because it’s where you normally carry a hydration pack on longer runs. I think it’s clear the design definitely targets distance ultra level runners. Folks who wear hydration yet also want an extra layer to quickly throw on and off without stopping during their run and also without needing to worry about a pocket to store the jacket in. 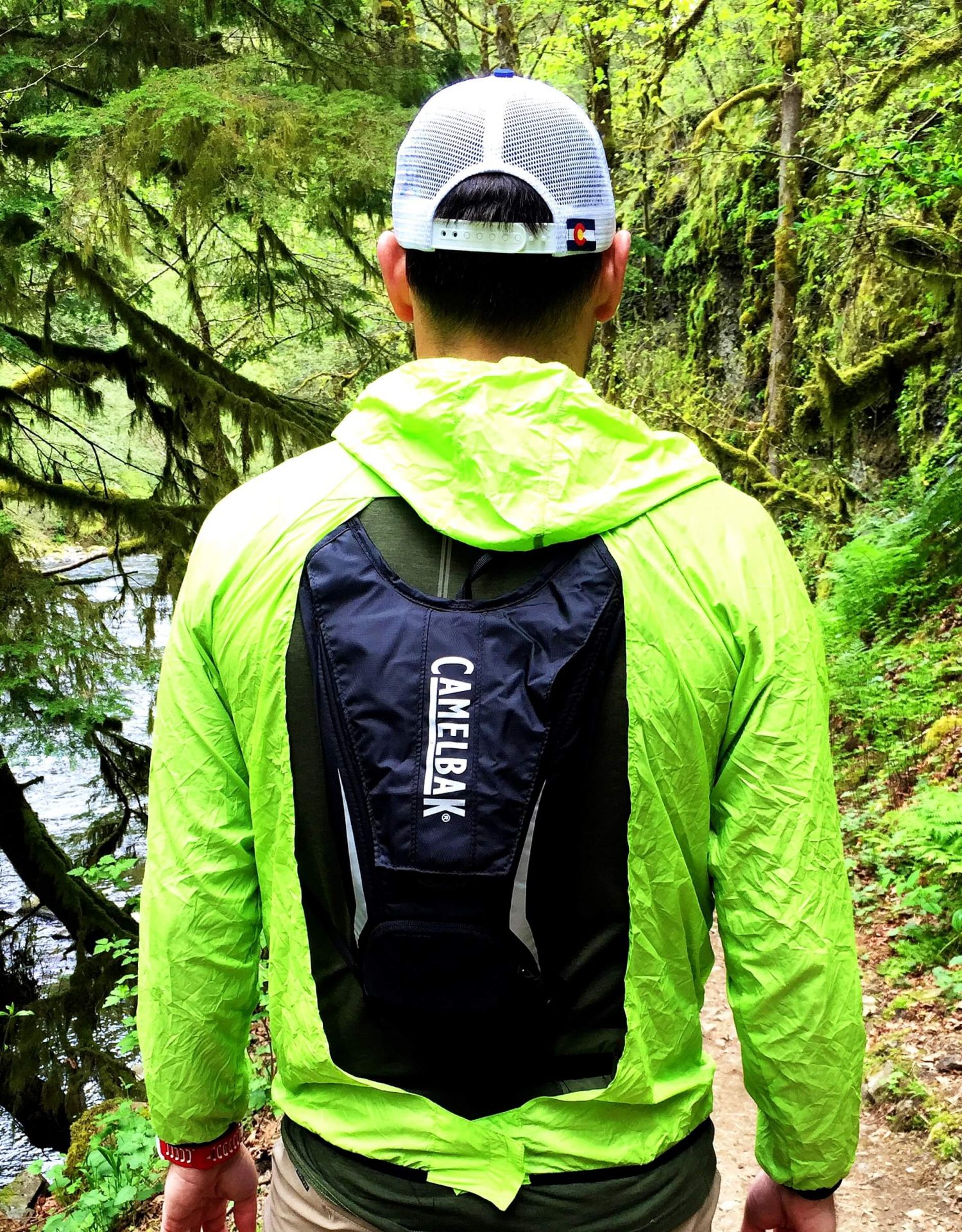 Some of the features of the jacket are ingenious of course. The entire thing stuffs down into a small sack which is connected on both sides via an elastic belt turning into what’s basically, a fanny pack. The idea being when you are in run, you can easily remove the jacket from the sack, slide your arms into the sleeves, pull it over your head, and then attach the velcro located at the bottom of the lower back. Boom, you’ve got a jacket on and taking it off is just the reverse of this process. You haven’t had to stop moving except to lower your pace just a little and if you’re wearing hydration then it neatly wraps around the unit so you never have to worry about taking everything off. Like I said, it’s ingenious. 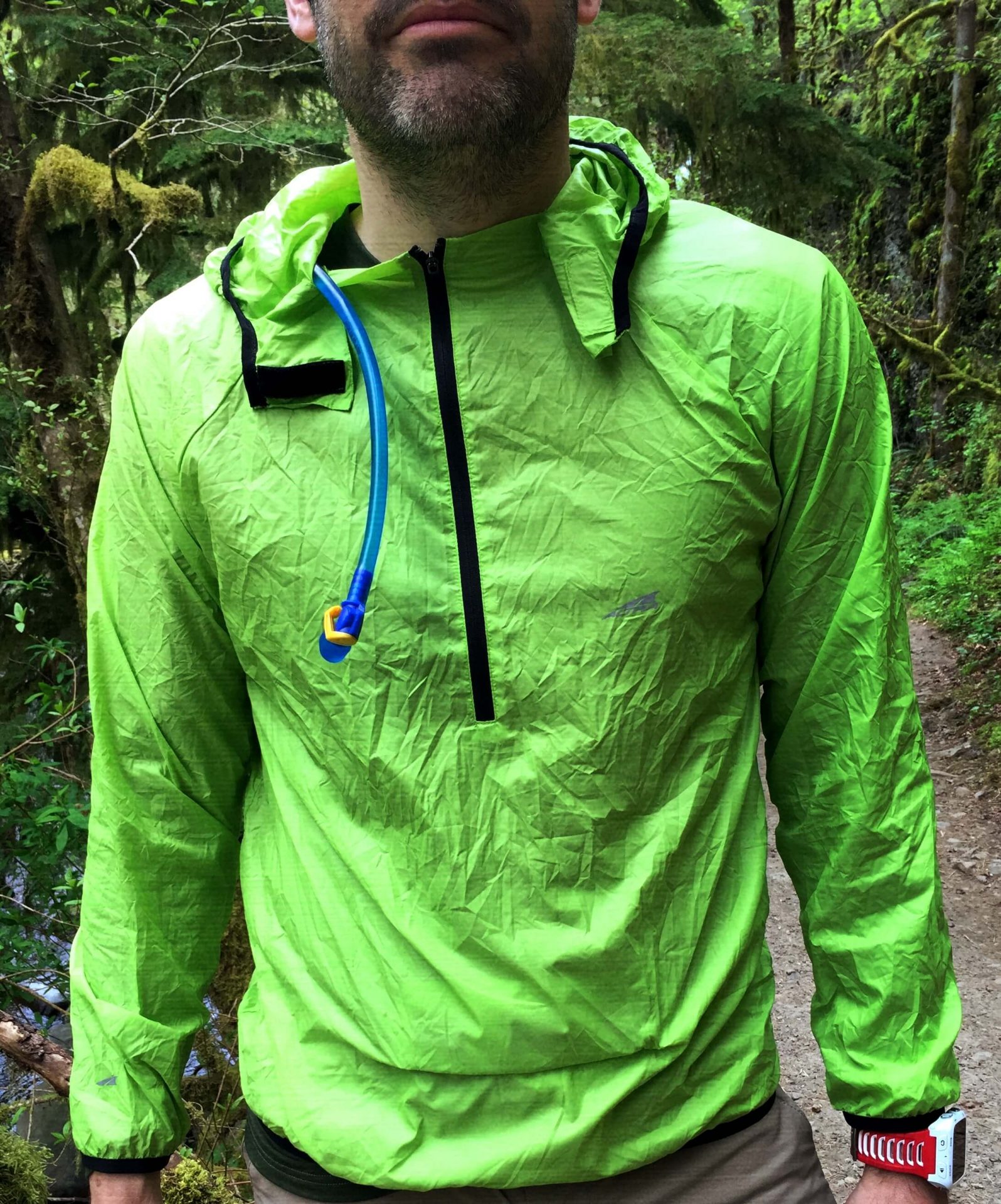 The jacket itself is made of a very lightweight ripstop nylon. It’s not going to prevent severe cold from getting through, but does a great job against light wind and rain. The actual jacket itself fits loosely and, fits well over layers and is true to size. It is available in both black and a light yellow/green.

In run, it works just as expected. We did find some drawbacks especially when using hydration packs that have front mounted water bottles which we discussed with Brian during the interview, but for the most part it worked just as advertised. We did end up stowing the StashJack in our actual pack in many cases instead of wearing it simply because we didn’t love the bounce, but we actually felt it stowed quickly and easily. One of our testers noted that he actually like wearing it without the back because it was so easy to get on and off. He also felt the opening in the back actually allowed for additional ventilation so while the front was protected from wind and rain, the back allowed the body to breathe better and was actually a benefit. The StashJack is also great for general hikers and not just distance runners simply because of the utility. 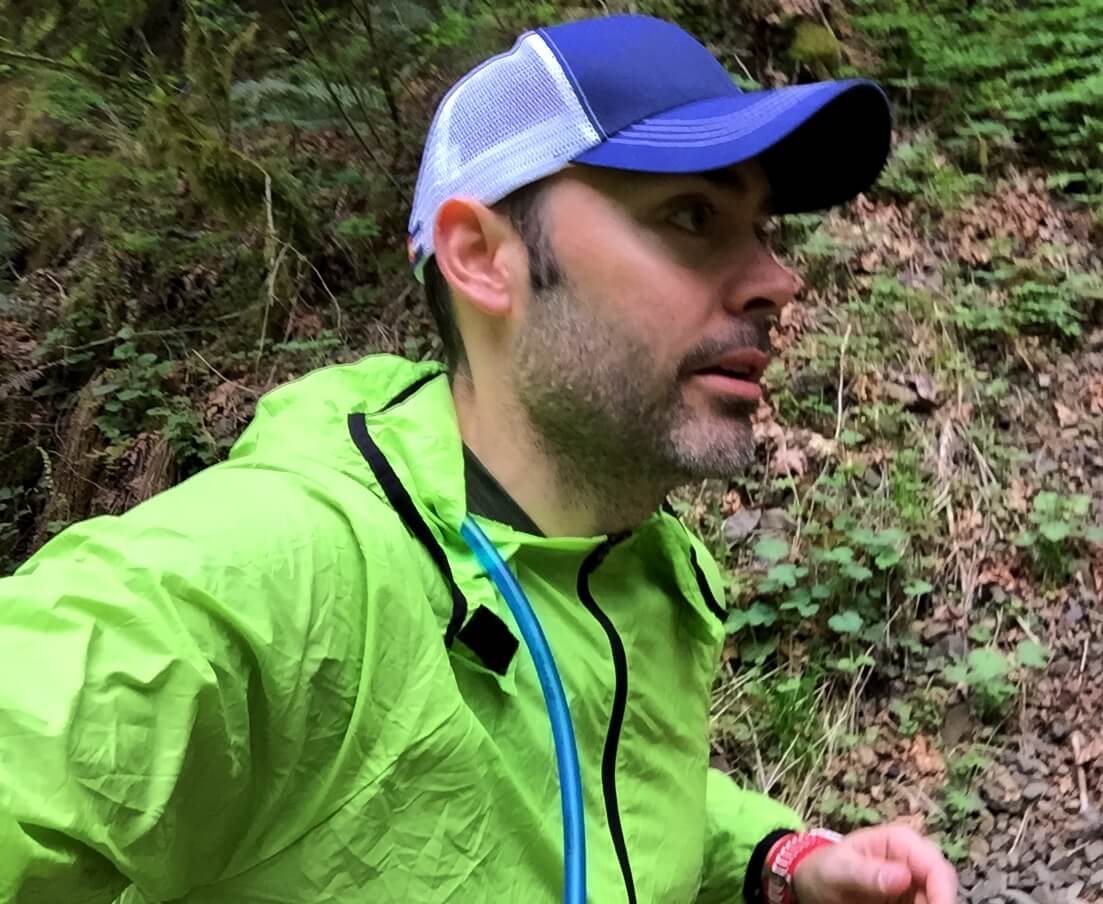 An Interview with Brian Beckstead

Can you give us some personal history, maybe when and what got you into running originally?

Beckstead: Family of runners! Started in middle school running track which led to high school cross-country & track. I eventually ran in college suffering multiple injuries before I turned to trails and ultras at the age of 23. I also loved being outdoors, fishing, and backpacking when I was a kid (still do!). I would pester my parents to take me up to the mountains as often as possible. All of this led to my love for trail running and good gear!

The StashJacket itself seems to be designed from a very personal place. It struck us all as one of those pieces of gear that is really a combination of those “wouldn’t it be nice if a jacket did this or that” type of moments, but you guys actually productized that. Can you talk about where the idea actually came from?

Beckstead: I have had several long nights running 100 mile races where I sent from hot-to-cold-to-hot. It was terrible! Then I saw something in Europe that skimo racers where wearing and I thought that if you made several crucial changes, it would make the most amazing ultra running jacket ever. Those things came together in my mind when I requested the StashJack to our R/D team to create such a great functional jacket.

It’s definitely a very niche product given the target market, it could be viewed as a risky play when entering this market, but also a massive differentiator. It definitely follows Altra’s model of being right on the edge of mainstream. Did this provide some comfort when you guys decided to go to market?

Beckstead: Absolutely! If you aren’t different then who are you? In today’s market I firmly believe in the mantra of “differentiate or die!” Plus I’m not sure if I agree with this being a niche product! It might appear that way because it’s different but I think it can easily become mainstream. Although this first product is more trail driven, we think that from the start we will have day hikers to people hiking the PCT find this a functional piece of apparel. There are so many places we can take it. We will expand this to having a backed version in spring 2017. Every 5am road runner in the country could find this piece of apparel in their rotation!

One thing we would love to see is handling for hydration packs that have chest pockets as well. Many of us use some of the newer Ultimate Direction or Nathan packs with front food/hydration pockets. Any thoughts on this?

Beckstead: Size up on the jacket! Still works great that way with extra room in the front.

Can you talk about where the Stash is headed next? Is it a pre-cursor of things to come from Altra?

Beckstead: I think the StashJack is another example of Altra thinking ahead and being innovative. We aren’t stopping our outside-the-box thinking. We will always be pushing the limits of what runner’s gear can do whether in footwear or apparel.

How about Altra in general, what are you most excited about in the upcoming year and longer?

Beckstead: The biggest launch and innovation for Altra this year is our IQ Smartshoe. We’ve spent 3 years developing a shoe with multiple sensors in each foot to give you live feedback on the way you run. Not only does it give you the data but will provide live coaching tips to help you run better!

Lastly, we like to finish by asking folks what some of their personal favorite routes/trails are, any top contenders?

Beckstead: I love any high mountain ridge. My current favorite is the Wellsville ridgeline here in Cache County. Its amazing.

And your favorite Altra model…?

Beckstead: The Lone Peak has been my favorite from the start. It just seems to be built around my foot for my style of running…oh wait, it literally is!!

I think it does a great job of reminding us of Altra’s roots and their focus on innovation as well as thoughtful product design. I all comes together in a pretty solid package. There are definitely some improvements we would like to see for version 2, but given this is just the first of many, it’s a great first start.