Topo Athletic remains one of those brands where you really have to be in the know to be looking for them. Their following is passionate, the pros that use them love them and if social is any indicator, then it’s pretty clear the fan base is growing. We have looked at the Tunventure and Runduro in the past, but now we take on the new Ultrafly.

To begin, I found that Topo shoes in general are pretty consistent. They all feature a bevy of similar features and structural design metaphors that span the entire lineup. In terms of technology, the closest brand I can align them to is Altra. These features include a minimal drop which are all typically 5mm and below bringing you closer to a zero plane. They all have a larger and more relaxed toebox which encourages toe splay and gives you more relaxed feel at distance. Also, all their shoes seem to breathe very well and feature a consistent use of materials. The Ultrafly was just released early this summer and I was excited to take it on the road.

The upper is a mix of super durable molded overlays and breathable mesh. They basically look like a killer trail shoe up top and don’t break down at all. The toebox is nice and large and the entire upper is super breathable. It’s not going to stand up to weather very well as I noticed that any level of water tended to get trapped more than I expected, but Topo makes a different shoe for that anyway.

The midsole is composed of EVA throughout and there is some additional material at the medial area which is supposed to help with guidance. Yes, this shoe is a stability shoe as well… but not really. For me, this additional guidance system is really for anyone and won’t necessarily do much for those that traditionally need more support. It simply helps encourage proper technique more than anything.

The outsole is composed of 4.5mm of rubber, but I found something really odd here… lugs? Yes, the Ultrafly has pseudo-lugs on the bottom making it almost like a multi-use runner. I am honestly not sure why this was necessary and yes it grips well, I just think that’s rather unnecessary. If they made the outsole more aggressive, with larger lugs and a rock plate, then this instantly becomes a super trail shoe… a bit of a split personality.

All the Topo shoes pretty much have the same profile, but I quite like the mix of overlays with the mesh visually. For men, these come in four colorways including some muted options, but I really enjoyed the Orange/Black model I tested. For women, the Ultrafly comes in three color choices, and the colors seem to strike a solid balance between what some find “girly” and just right. Overall the colors Topo uses I am a huge fan of, everything feels just like a slight tweak on the primary color palette which means very identifiable shoes.

As you have noticed from other posts, I am a huge fan of Altra specifically because they really set out to design the best possible shoe for runners trying to hit all those target areas that are important. They didn’t sacrifice for the sake of going over the mainstream and instead focus on issues that would make runners better. Topo is no different and in fact, when I’m wearing a shoe like the Ultrafly and comparing it to something like the Torin from Altra (which I am also testing), I almost feel like I’m wearing a shoe from the same company. There are some big differentiators though and I’ll try to cover those here as I jump into my runs.

My first runs in the Ultrafly were nice and easy. I have put a good amount to distance on the shoes now, but I started off in the 6 to 10 mile range just to see how well they would perform at varying cadences. In the first run, I focus on dialing it up and down, interval work, not from a fitness perspective, but really just to see how well this shoe would respond. I’m happy to report that it responded very well. This shoe is a little heavier than I expected, coming in around the 9 ounce range in a size 9 (9.2 to be exact), but for me at a size 12 its pushing over 11oz. However, the feel of the shoe made up for it quite a bit. Both in terms of the upper and it’s breathability, coupled with the amount of flexibility it has, definitely give you a little more quickness than I expected. My concern turned to the cushioning because typically when you get a nice light shoe and can establish quicker pacing, you have to sacrifice a bit in terms of your comfort level. Again, happy to report that I am not experiencing this much in the Ultrafly. It nowhere near has the cushion of something like the Hoka, but at a 28mm+ stack height there is plenty.

In terms of the offset, I am really happy that there appears to be a trend towards lower drops among running shoe manufacturers. Focusing on a more zero plane from toe to heel encourages a better run technique and I feel like the 4 to 5mm range is a great sweet spot for moving people in that direction. I also found that technique and cadence and foot-fall were definitely encouraged because of the shoe design, noting that I found myself falling into a pretty consistent cadence with limited focus on it.

Lastly, at distance, I found the Ultrafly really deliver. As a Hoka fan as well for big long runs, I wasn’t missing a ton of cushion, and I see a future where potentially Topo might offer something like a maximum cushion version of the Ultrafly to really challenge that market more directly. Toes felt great as well and in fact, the entire front of the foot I found to have plenty of movement while still allowing me to retain control. 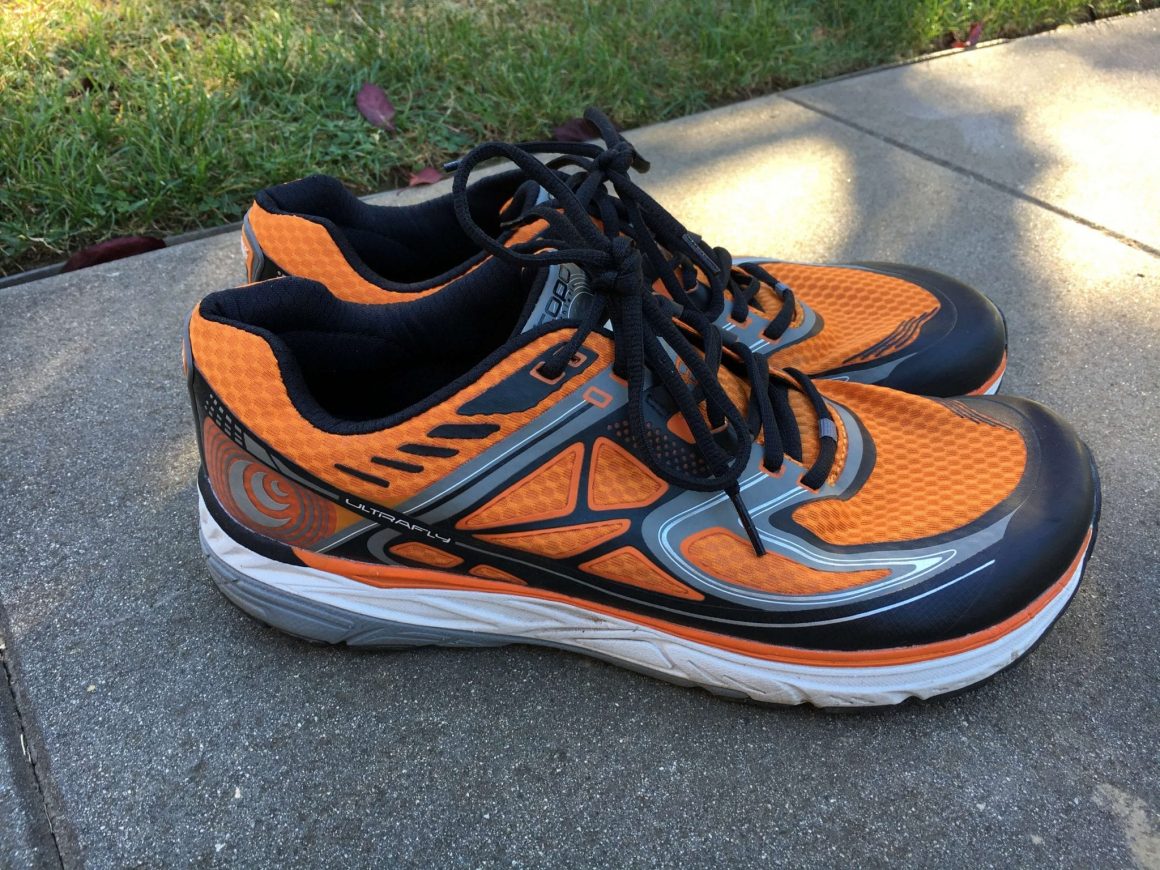 I was a really big fan of the Runventure prior for trail use, but the Ultrafly really left a huge impact for me in terms of where Topo is headed. I do think we are seeing a little identity crisis from the Ultrafly given the trail style upper and road bottom coupled with the trail style weights, but its a great next step. Note, I was actually so happy with the Runventure that I got my wife a pair as well and it’s pretty much her go to shoe on the trail. They have lasted well over a year and seen many miles with heavy use. I’ll try to get her into the Ultrafly as well as her endorsement is probably better than anything I can offer. I do think from a brand perspective they have some work to do to ensure the running market knows more about them, but I can say the Ultralfy is a massive step in the right direction.