I’ll admit Mizuno was always one of those interesting brands for me. I’ve never run in their shoes before, but obviously very familiar with the lineup and their large diversified portfolio. They seem to be a brand that have significant following in the running world and those who use their shoes are typically passionate, but for some reason it’s not a brand, at least in North America, that people instantly identify with as a true running brand. I got a chance to take a couple of their shoes for a run, the first being the Wave Enigma 6.

First off, note that the Mizuno running lineup is very deep and by that I mean it competes directly with every other large-scale running shoe manufacturer in terms of cushion level, support, running in trail, skill level, etc. The fact that I am testing the 6 should be cause enough to realize how many iterations have been in market prior. Needless to say, I was excited to try them out as I was incredibly curious.

At first glance the Wave Enigma 6 looks like your prototypical running shoe. It doesn’t break a lot of boundaries in terms of features or design, but focuses more on delivering a very consumer friendly shoe and focuses on diversification across tech within cushioning, support, weight, etc. They basically fit right in there with brands like Asics, Brooks, and the New Balance and Saucony of old. I say of old because those two brands are starting to mix it up a bit aesthetically and find their own direction when it comes to shoe design. Basically, going to the Nike route. So let’s jump into the shoe…

The upper on the Enigma 6 is composed of a semi-stretch material as well as several molded overlays. It has a lot of sewing which is something most brands are moving away from, but seems to work in the 6. Lacing up feels really solid and never backs off so you get a consistent fit and the heel cup holds you nicely as well. Note that most Mizunos feature a water resistant mesh as well, this works decently well unless you get caught in one of our northwest deluges.

The drop on these is 12mm which I think needs to be brought down a bit, but it definitely targets your recreational running consumer. The mid is composed of U4icX which is patented Mizuno technology (another custom EVA setup) that is supposed to encourage comfort and performance while still remaining lightweight.

The outsole is a mix of targeted carbon rubber (X10) and standard rubber (XG). The rubber has also been treated with synthetic leather which is designed to increase traction in wetter weather. I found the shoes to grip really well and move across uneven and varying surfaces with ease. They tackled pavement, gravel, bark chips, etc without difficulty or control loss.

So the profile of the Wave Enigma 6 is your prototypical running shoe. This is not a knock in any way, it’s well-designed, looks solid, and is very consumer friendly. They favor molded overlays and breathable mash which give you an almost bulletproof feeling from a visual perspective. The shoe at first glance just looks like a beast and by that I mean it looks tough, not that its big. This is probably due to the significant number of overlays, and it doesn’t really contribute to weight or performance, just the aesthetic. There are three color choices to choose from and there is diversity within the lineup to ensure there is something for everyone. I think the best is the blue-green combination I was testing, but I was jealous of some of the cool combos other Mizunos have. 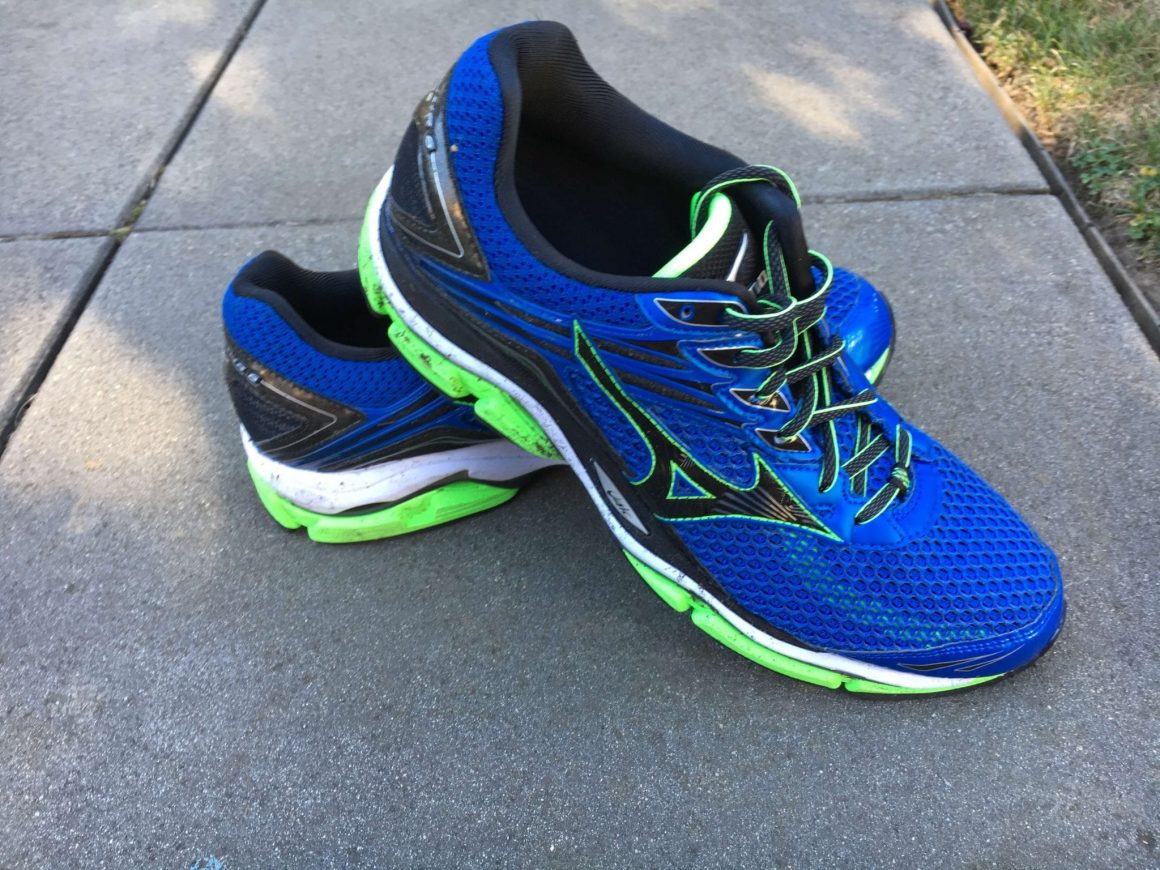 The molded overlays also have a little shine to them which gives it a flashier look, so less muted. When the sun hits them, they reflect even more and I thought this was kind of a cool effect. Definitely a differentiator visually in terms of other running shoes. I wouldn’t say it looks fast in any way, but they’re doing some things visually to try and overcome that and this flashiness is interesting.

The Wave Enigma 6 is one of Mizens highest cushion shoes, so going in I was looking forward to having a little extra for distance. The shoe itself fits incredibly well and it feels solid underfoot, no strangeness through the arch or the toebox. The toebox itself is slightly enlarged from normal which I didn’t notice right away until my foot was inside and then found I quite liked. I hadn’t expected it given its very typical profile, so good surprise. My first in shoe experience was pretty plush. 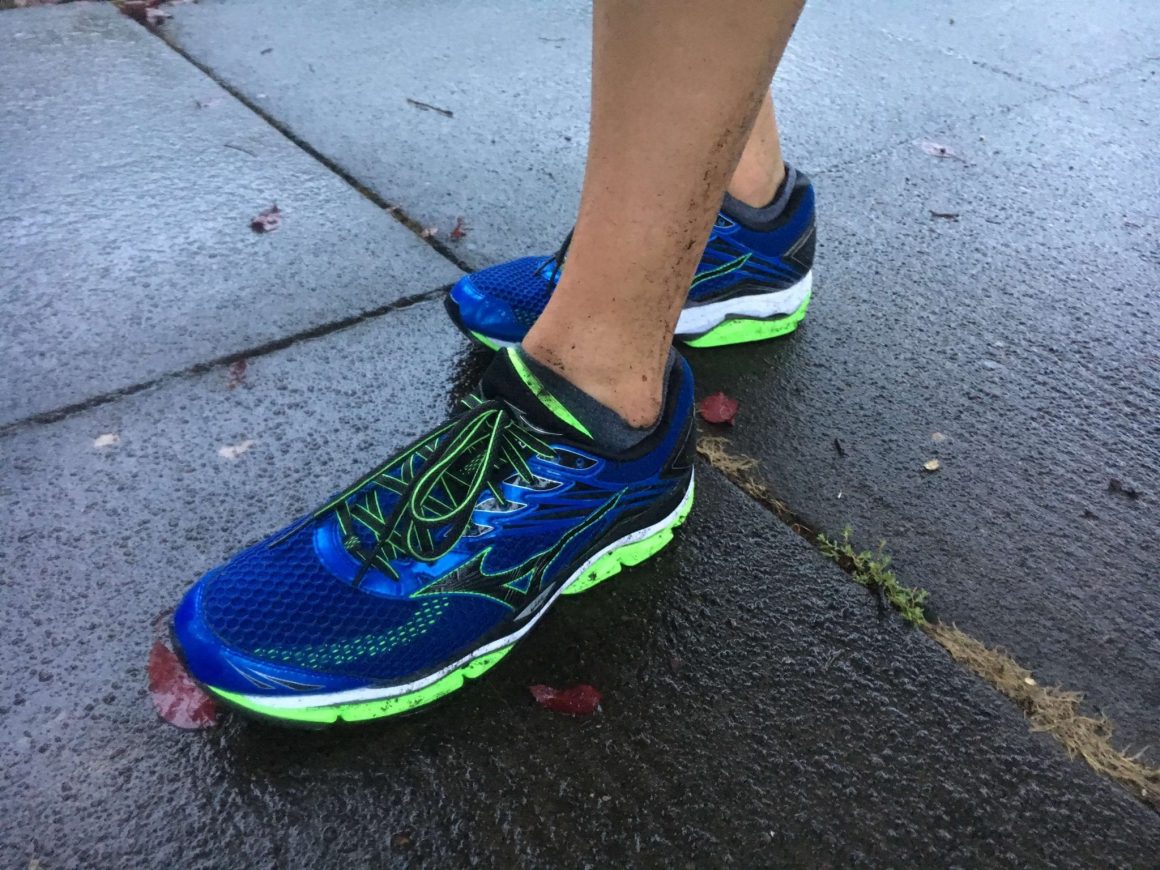 The actual in run experience was also really solid. At first I thought it was a little firm and even a little heavy, but over time it gradually became more normal for me. I can’t say the shoe blew my mind with all these new features or design changes, it was simply a really solid run. Yes they were comfortable, my feet were happy, and I never noticed a lot of major problems. I did notice was the shoes at times felt heavy and a bit large, but this really depended on the state of my legs. Sometimes the extra little weight actually got me through some runs as it provided comfort, but it was an odd feeling given the weight is similar to many other shoes I have tested (~9oz). My last run in these was oner 18 miles in a downpour and honestly, they crushed it, so I’m a little perplexed.

The Mizuno Wave Enigma 6 was solid overall. I didn’t feel like this you broke a lot of ground in terms of other running shoes, but throughout every run I found my foot to be comfortable and my legs allowed to go to their maximum potential. I think that in itself is a sign of a solid shoe so while I did feel at times they were a bit bulky, they saw me through some really tough runs. I feel like I’m still a bit of a crossroads, but I do understand why people are passionate about them. Once your foot is comfortable in the shoes and accustomed to them, then you definitely would want to stick with them for the duration. I am actually really looking forward to checking out more Mizunos in the future as this was a great first run and definitely defied my expectations.