If you know any performance runners out there who are Saucony fans, then my guess is they have raved about the Kinvara. It has been the choice for elite runners for years now and the community has been waiting to see what this next version would look like. To me, this update with the Kinvara 8 is starting to make the shoe as welcoming to recreational runners looking for some speed as it is for elites.

The upper on the Saucony Kinvara 8 has been fully redesigned and is now primarily knit based with new FLEXFILM overlays. These overlays give the shoe some structure, especially for side to side motion, but they didn’t use too many and end up adding a lot of weight. The interior now features an internal strap system, which really holds the foot in place and if you are a tri athlete, then you may have seen something like this before, but it’s definitely new for most runners.

Saucony also continues their trend of moving all of their models to their EVERUN platform in this case adding a few millimeters in the topsole. I actually love the platform overall from the first time I tried it back on shoes like the Freedom ISO. It really adds a new layer of responsiveness to their shoes without the addition of weight. You also don’t really notice it at all, so it just kind of does its thing, so really enjoying it.

The outsole on the Kinvara 8 doesn’t use Triflex like many other Saucony models. Instead it uses a super flexible EVA as well as some reinforced contact points. My only caveat with the outsole is the material breakdown, the EVA wears fairly quickly and you will notice some peeling and the tread wears quickly.

The Kinvara comes in a ton of colors, there were 8 available at launch and then they are also offering race specific models as well. The shoe looks super cool overall and some of the color combos are really solid. There is really something here for everyone and when they add their weatherproof versions, the possibilities go up even more. 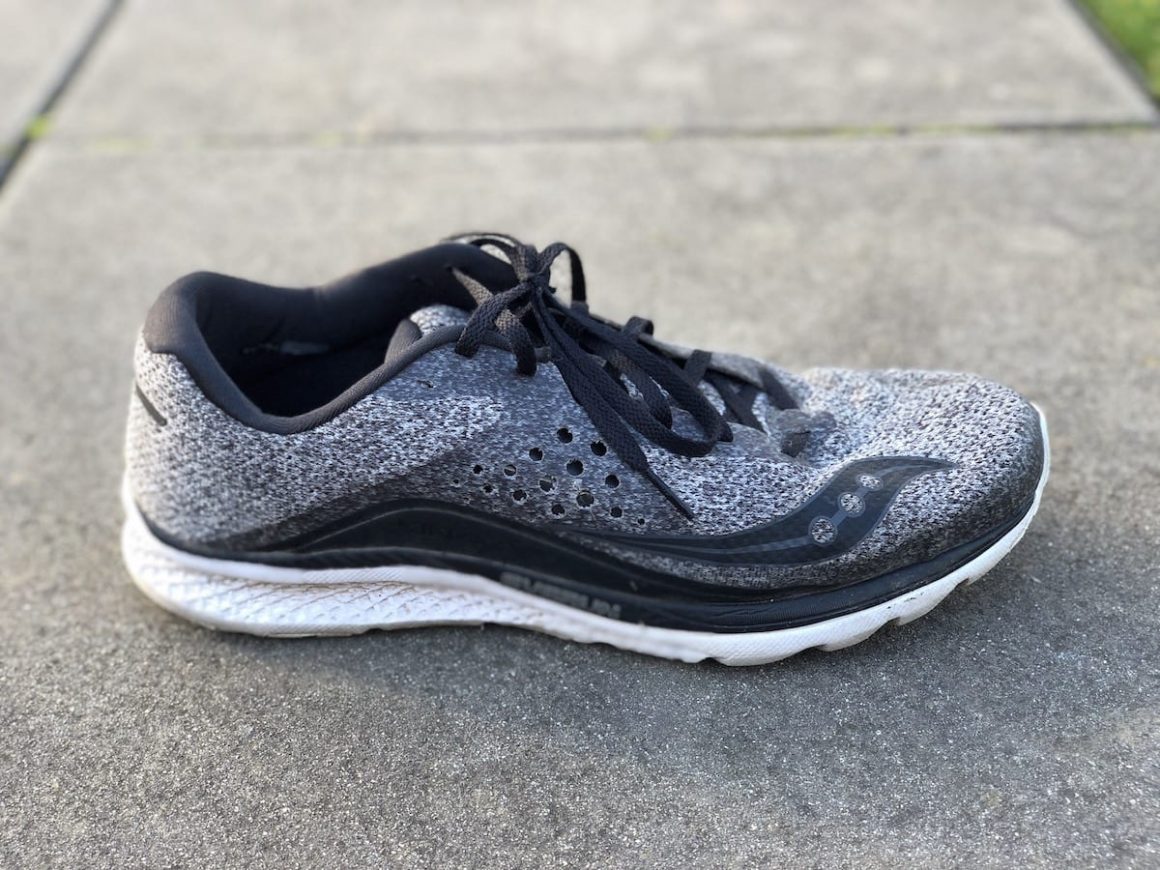 These things can go… I’ll start off my run test with that and the changes to the upper in terms of full knit and FLEXFILM make them super comfortable. My issue with knit shoes has always been the mid and the outsole, the first iteration of these always skewed very low cushion, but the Kinvara 8 is really trying to fix that. At 23mm stack height and with a layer of EVERUN, the comfort doesn’t end in the upper.

For the majority of folks looking at under 13 miles, these are your speed shoes. They can go really quick when you want, they have a nice stance with a little extra width up front, and they track really well. I have friends who are putting up mid 5 times in these shoes and swear by them. I’m not quite there however, so for me it’s about trying to get into the high 6s when I can with normal times being in the low 7s. As for distance and recovery days, these can work as well, but this is going be very personal. These shoes are aggressive and performance oriented so there are definitely softer options out there.

I did have one negative on these. I started to notice over time the breakdown of the mid and outsole. It’s not entirely visual, more structural in nature. I realized my foot was starting to roll outward making my stride a little more awkward. Not really sure where this is happening, but it is definitely noticeable even when just walking around in them.

The Kinvara 8 maintains the title of Saucony’s performance oriented speed shoe. That being said, some of the updates are not without issues, and the shoe definitely seems to wear quicker than prior versions. As the shoe broke down, I noticed some lateral rolling due to the structural wear. I would caveat that while its highly performant and definitely still the mainstay in their lineup, be prepared for it to wear faster than normal.

Hoka One One Clifton 4 Review