Every year we look forward to this one, so when the Clifton 4s landed we were really excited to say the least. No other shoe Hoka One One offers draws more conversation as people debate the changes from version to version. It is their quintessential neutral road shoe and for some its everything you love about Hoka and for others just the opposite.

The shift from the Clifton 1 to the 2 was met with controversy, a good portion of diehards just couldn’t let it go. When the 3 was released, it looked like Hoka had resolved a lot of the issues folks had. The 4 however is a move in a whole new direction. This is the biggest redesign they have ever done, so definitely looking forward to the commentary around it.

The Clifton 4 features a fully redesigned breathable mesh upper with printed overlays that run along the side walls given it just a touch of structure. The heelcup is more tapered, but still holds you well and the lacing system follows 3’s, but its a little more tapered bringing the eyelets closer together. The big talking point will be the overall design and the toe box, it has narrowed up quite a bit. They have eschewed the rounder toe box and made it a little more tapered on the exterior. This brings it both visually and structurally more in line with other road shoes, but it didn’t necessarily feel like a Clifton.

As with the majority of Hoka’s road shoes, the mid is full EVA and you get a nice amount of cushion. This is a Hoka after all so the stack height and comfort level under your foot feel very consistent with past shoes.

Aside from the expose EVA, the Clifton 4 features strategically placed reinforcements at targeted impact points in heel/forefoot. These are points that typically wear more aggressively, so these rubber contacts prevent that from happening.

There are 7 color choices available, so truly something for everyone, but the big change here is in overall design. This shoe looks more like all the other shoes out there, so it doesn’t feel necessarily like a Hoka at first glance. It is much more mainstream in the design, so clearly an international move to the broader market. 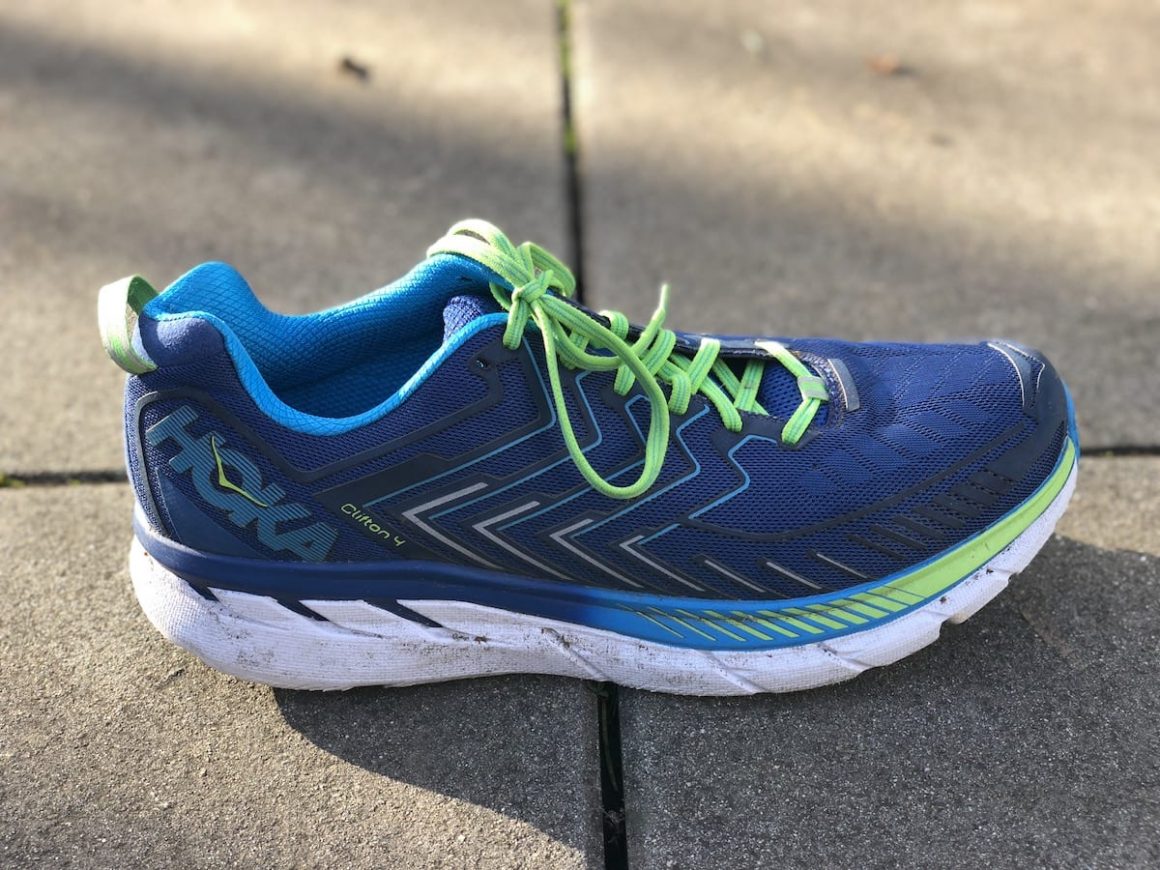 The out of the box experience immediately had me worried, the first most apparent thing I noticed was the tapering of the toe box and an overall decrease in the width throughout. I was nervous to say the least… how would they perform? Why the dramatic change? Would I get used to it? The list went on. My first couple runs changed all that and the fears were put to rest.

The Clifton 4s are comfortable to say the least, but like so many Hoka models before they are also perform really well. They are lighter than you would expect and sure it has gained a half ounce or so, but it always amazes me how good these shoes can feel given how much they weigh.In terms of straight performance, these things have been run at almost every possible distance (within reason). At shorter distances, meaning ten miles and under, the Clifton performed well. My pace numbers dropped in almost all circumstances and I found I could almost maintain an absent-minded improved cadence from day one. After crossing the half marathon range and up to twenty miles and more, the value of the comfort really set in. I still was pulling improved pace numbers, but more impressively my feet weren’t all that sore. The meta rocker design propelled me forward as designed and made me think less about my stride and focus on other areas.

I honestly love the update with my only real complaint being the narrower toe box. The shoe feels faster and is more responsive than ever. It is still amazing comfortable, cradles the foot well, and stands up to the most demanding runs. It has gotten a little heavier as well, so I don’t love that trend, but hoping this sees it level off. I do like seeing this move more into the mainstream because the “ugly” big shoe persona has plagued them for quite a while as well. I know many won’t love the update, but I am pretty happy with it.