Let’s start this off by saying the original Brooks Caldera was a pretty solid shoe. It was rated highly by most and honestly it was just a relatively unsung very comfortable distance based trail shoe that performed well to boot. When we got our chance to check out the new Caldera 2, we were excited to say the least.

The upper gets the biggest redesign of the entire update. It uses a new sublayer of Mesh for increased breathability layered with Cordura as a top layer of mesh for durability. I still retains its tole protection as well as the laceholder in the tongue and the Velcro gaitor trap on the heel. It also sports a well padded collar and an internal bootie for a sock like fit. It is fairly durable as well from what we have seen, no issues to speak of so far.

The midsole remains relatively unchanged. It uses Brooks’s greener designed BioMoGo DNA platform which combines both cushioning and responsiveness. We wouldn’t say there is a massive about amount of response here to make it performance focused, but more than enough for real distance runs. The Caldera 2 also has no rock plate which you can take or leave depending on what you are you using them for. The mid covers most of the sharp stuff so unless its highly technical/jagged terrain, you are probably good.

The outsole also remains unchanged from the original. It is primarily rubber adhered to the mid layer and then they tacked on these nice multi-directional low profile lugs. They aren’t super aggressive, but do plenty to keep you on track and work well for climbing and descending. You also get a pretty wide contact point in the toebox which is great for toe-splay and relaxing the feet at distance.

Just like the original, you’ve got one choice for men (pictured here) and one for women, both very similar. It looks a lot like the original as well, just with a different middle paneling. You either love it or you are meh with it, but consensus here was that the splash of color with the black is fun. 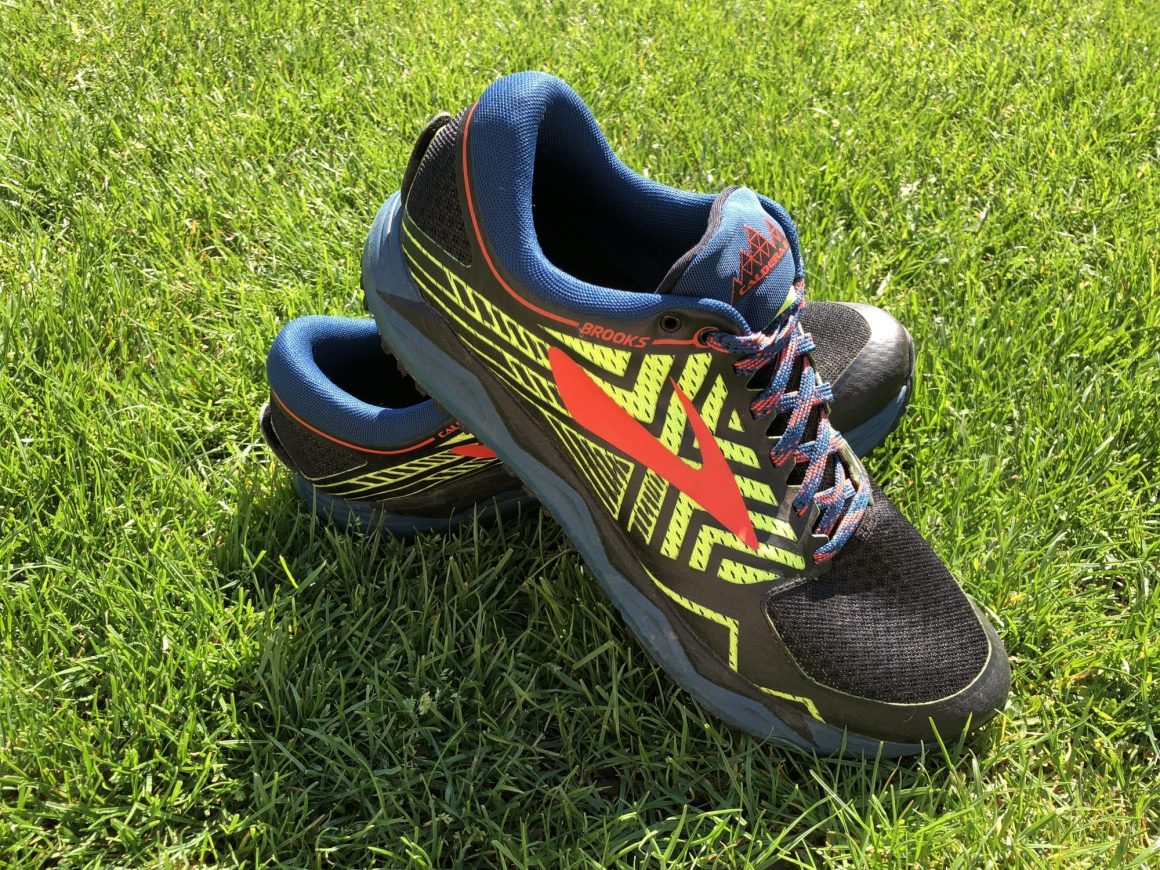 The first thing you’ll notice is that the Caldera 2 is super comfortable. The reason we call that out initially is that it is not usually something you think about when it comes to trail shoes. To take a step further, they have an almost slipper like fit and honestly feel better than many road shoes on the market. On top of this they also come in 10 ounces, so they are lighter than many road shoes as well.

As it compares to Brooks other flagship, the Cascadia, the Caldera 2 feels less performance oriented and better for an easier ride over distance. The rigidity in the Cascadia is replaced with a suppleness that just screams comfort and “take me for miles”. The nice part is they also share the same outsole so you get a nice level of traction and control and you can climb and descend just as aggressively.

Honestly, we are really impressed with the Caldera 2. It flies a bit under the radar and is overshadowed by the Cascadia, but this is really a different kind of shoe. For most people who are more recreational trail runners, the Caldera platform will actually feel and perform better and probably allow for a more enjoyable overall run experience. So give them a shot, this probably feels a lot different than most Brooks shoes you have tried.