When the SolarBOOST was announced, we were excited to say the least. Adidas has been a bit dependent on the Ultraboost line for a while, so the idea of something, was truly exciting. On top of that, they hit the style on the head again coming up with something both performance oriented, but also entirely fashion forward.

The upper on the SolarBOOST is all techfit, multiple layers of knit fabric, the toebox is a separate material, a stretchy mesh more like neoprene or something similar. It also has a molded heel counter and a sizable heel tab for simpler entry into the shoe. The tongue is also well padded, so the entire upper itself feels pretty good. The biggest drawback is probably the toebox, the material used there, while comfortable, is also less flexible. This leads to less overall movement for the forefoot.

This model obviously uses Adidas’ Boost technology. Boost at its core is designed to be highly responsive, but more than anything it really just has a nice feel sitting between cushioning and performance. The SolarBOOST also has a bit of stability with the addition of their Solar Propulsion Rail, basically support rails. Lastly, they added a Torsion control System between the heel and forefoot which adds yet another layer of stability.

The outsole on the SolarBOOST is made of Continental rubber which does provide amazing traction in many conditions. The rubber is laid out in a web pattern that spans the entire sole of the shoe which does lead to be a bit of excess weight.

The SolarBOOST comes in four colorways for men and women, but something tells us we will see more as they have already added two to the original release. The actual body styling itself is really spot on, riding that fine line between running and style shoe. At first glance, this might be their best looking Boost yet. 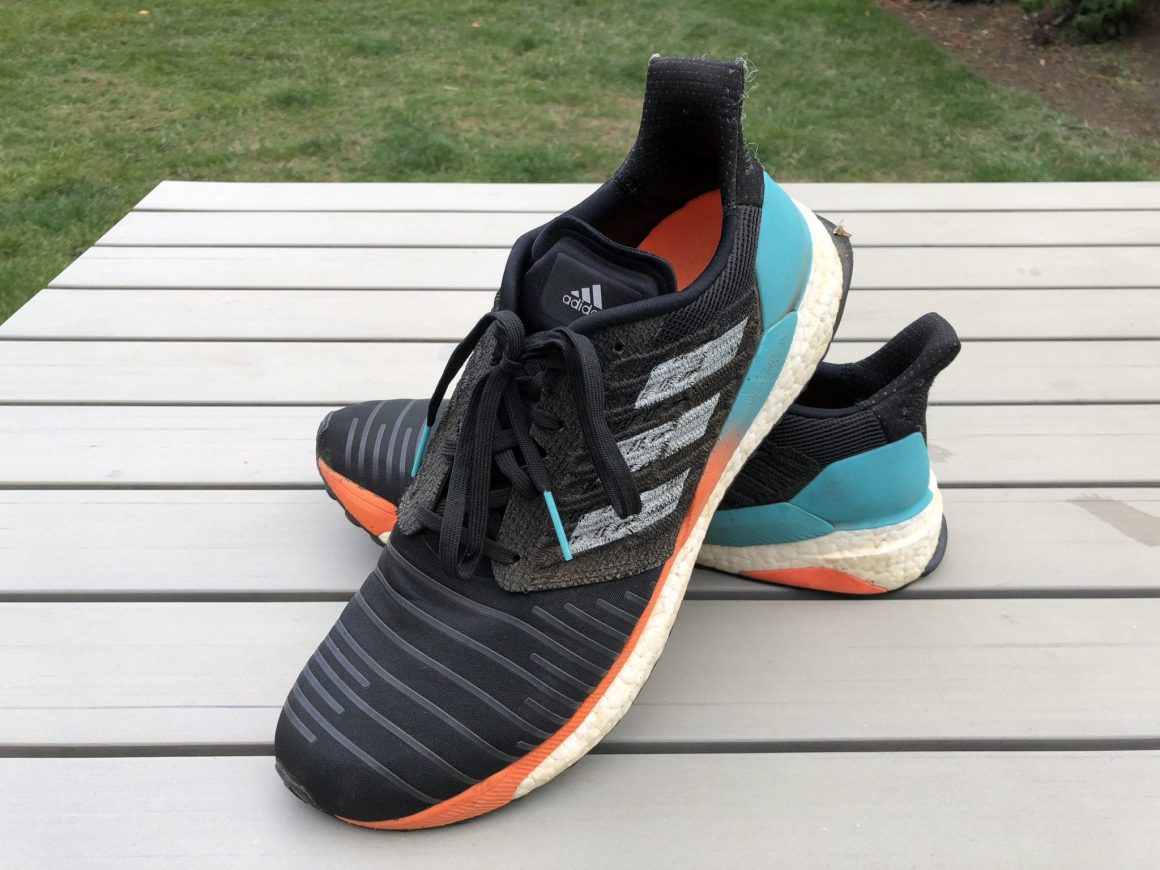 The SolarBOOST are really clean looking, out of the box I was ready to wear them to work instead of play and the idea of dirtying them left me a little sad. However, I went out and did my best running them on roads, trails, gravel, etc and utterly destroyed them and I am happy to report they are a ton of fun, but… this is not a performance shoe.First off, the extra weight is noticeable. All of the rubber on the outsole definitely adds a little extra to it. Next, while I love the style of the upper I found the toebox to be a little snug. Adidas shoes tend to run narrow, but that is not what I was feeling, more a tightened from the material not a side to side pinching like you’d find from a width issue.The run well and perform decently, the ramp is a little high for me, a 10mm drop is aggressive, and they most definitely are not your speed day shoes. However, most recreational level runners will find them just fine for every day runs.

It feels like the verdict is still out on the SolarBOOST given it is a new model for Adidas. While it is visually very appealing, it’s well cushioned, and performs fairly well, it is heavy for a neutral road shoe. It is better suited for slower pacing and recreational runners. We do love the shoe aesthetically and honestly would be just as happy wearing these with a pair of jeans as we are in-run.