Newton has always been one of those brands that I was always curious about. A lot of other reviewers and folks I know swear by them, but I have never had the chance to try them out. I have always loved the visual of the shoe and I also love the fact that it represents a company doing it their way. Newton has a very specific point of view on shoe design, so I was more than excited to check out the new Fate II.

At first glance, the Newton visual profile is very similar throughout the entire range. The differences are subtle and they don’t affect the aesthetic or styling all that much, typically overlay changes, slight variations in the outsole, etc. The most prominent feature on all their shoes is the crash pad on the sole known as the P.O.P (Point of Power) which will get more into, but Newton also keeps the shoes very light, gives them wider toolboxes, and minimal offsets. Basically, it ticks all the notches I’m usually looking for.

The upper is fully seamless with an open-weave mesh and no-sew overlays. The Fate II also has enhanced metatarsal stretch panels. Basically you get great breathability and a little bit of structure and support from the overlays. The shoe also has 360 degree reflectivity which you don’t notice at first glance and is a huge plus.

Separating the Fate II into mid and outsole is almost impossible because of their design model. The traditional midsole is high rebound EVA foam and also includes a bio-mechanical metatarsal sensor plate. it also features Newton’s Action/Reaction technology in the mid-foot and heel which is really a combo between mid and outer as this describes a method where the lugs can move vertically during stride almost acting like a trampoline to give you a nice level of bounce back.

The outsole itself is durable rubber, but all the magic lands in the Point of Power platform. Newton offers three different types of P.O.P each with a different focus for the target runner. In this case, the Fate II is a 5-lug P.O.P 2 platform. This means the lugs are beveled for a smoother ride and this shoe is all about action/reaction. The other levels are either about increased responsiveness, for racers, or lower foam lugs for a softer ride.

I mentioned this prior, but it’s worth saying again. The Newton lineup to me to me is full of very appealing looking shoes. It takes the traditional running shoe profile and tweaks it just a touch, enough to feel familiar yet also shows off its individuality. I’m also a big fan of their color palettes and in this case I had a chance to test the red and black version of the Fate II, the other alternative is a turquoise. Across the line, they offer some very striking colors as well as some neutrals, but for me nothing in the lineup is boring really. Everything has a little bit of a personality which is great. The biggest oddity comes in that P.O.P piece on the sole, but most people hardly notice it. Everyone’s attention is typically on the upper and in this case the Fate looks very nice. It is available in two different colorways for men and women. 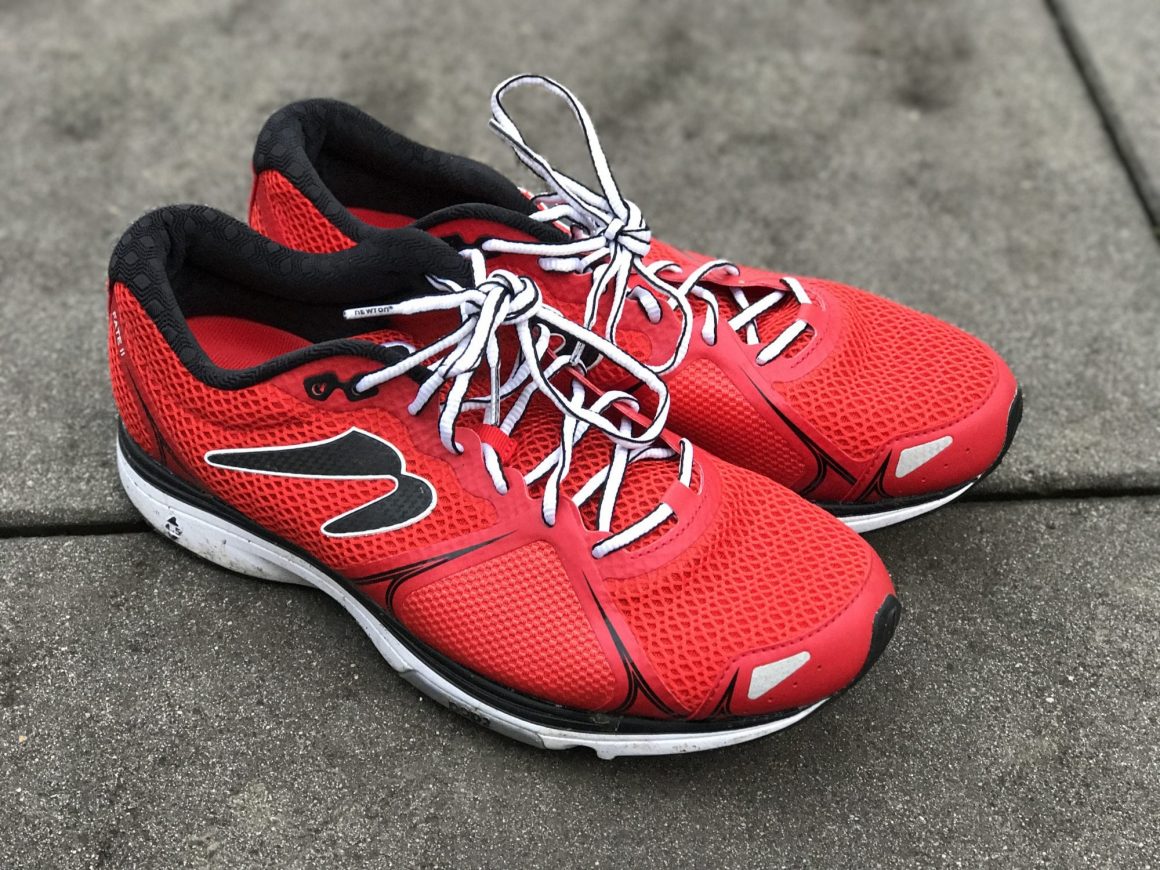 The first thing you’ll notice when you’re running with the Newton Fate II is the weight or the lack thereof. Many of these alternative shoe manufacturers have done a great job of figuring out how to lighten the upper of the shoe to a point thats two to three ounces less than their closest competitors. Sometimes this can be hard on your foot for a couple reasons. First, your foot tends to need to do more work especially in the upper. This is because the upper is composed of a breathable mesh, but Newton eschews a lot of the overlays that other shoe manufacturers have to drop the weight. Basically, you can feel your feet working more and getting stronger while you’re running in the shoe. This will be offputting for some people at first, but the mantra for Newton is to focus on proper shoe design and proper running form. The next thing you’ll notice is breathability, and that upper breathes very well. That being said, when it’s 32° outside make sure you have a decent pair of socks on because you will feel it. It is a blissful warm weather running shoe…

In run, I immediately noticed that P.O.P. pad and it took some getting used to. It is just not something normal for most of us so at first it feels more like a problem. It’s job is to move you into the proper stride and help transition from your heel, grip more, and generators more acceleration forward. The problem is for those first few runs, it’s just going to feel like there’s something odd under your foot in that spot. Again, like other shoe manufacturers who are very rigid in their design, I would say to give it time. Once you focus on making use of the pad and making it part of your drop zone during your stride, things change quite a bit. The entire shoe becomes way more comfortable while you’re running and when you get sloppy, you feel it. So it does a good job keeping you in the proper form and creating acceleration, but this is a learning experience.

During sub-10 mile runs, I found that I could really fly in the shoes and in fact slowing down made the shoes less comfortable for me. They honestly really feel more like a racing shoe than a training shoe, but it never bothered me. They are light and when you hit that pad in the right spot it pushes you forward in a tremendous way giving you a solid amount of acceleration.

At distance and by that I mean half marathon it up, I would need some practice to strengthen my legs and feet more. I noticed that as my legs got tired, my feet get sloppier on my landings, which many other shoes force correct. The Fate IIs and the P.O.P. in general give you tactile feedback but because the legs were tired this would lead occasionally lead to deceleration. I do think once you’ve mastered it however, it just becomes second nature and it’s really a question of time with the shoe and inevitably your legs, ankles, and feet get much stronger with these. I honestly really dug running in them.

I was new to Newton coming into this, the Fate II being my first exposure. I knew enough about them from what I had read and seen, but I hadn’t had a chance to run in them. I now understand what the hype is all about. I find a ton of similarities between the Newton brand and another, Altra, where you need to put some time into the shoe to really reap the benefit because these shoes help you run more effectively. When you first try the shoe it will feel very different and in some cases might be off-putting. It’s about taking some time with the shoe to achieve your maximum potential. Once you do this, I feel like the Newton Fate II is excellent for the majority of neutral road runners and will help heel strikers transition to a more natural fore to mid-foot stride.