In the shoe world, there is a whole new class of running shoes emerging, something that used to be primarily known as a speed category. However, with the introduction of lighter weight fabrics and varying uses of EVA, we are starting to see shoes that are significantly lighter yet still offering solid cushioning, responsiveness, and performance. Skechers has been on this train for a while and with the release of the GOrun 5, we get a real look at how far they have come. It definitely breaks the rules, but while it’s got some minor oddities, it is very successful in a few key areas. 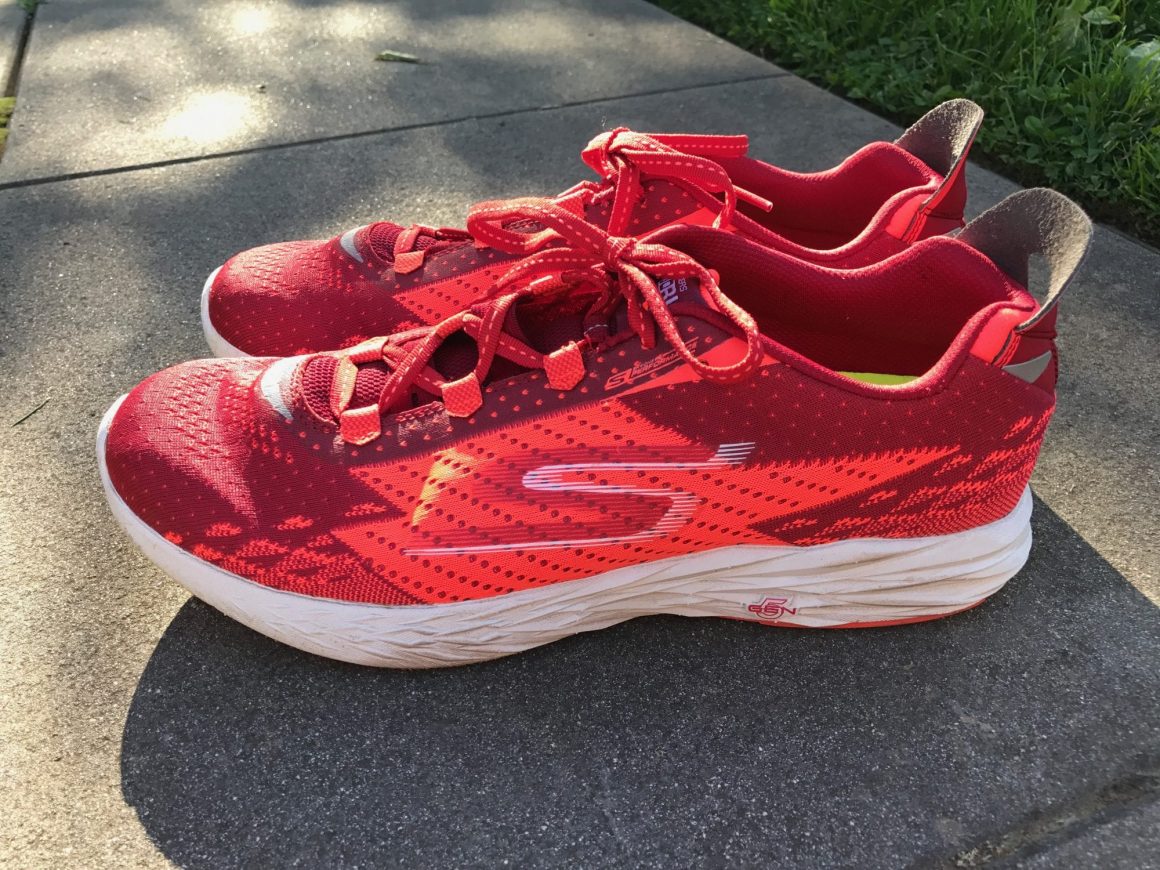 The upper on the GOrun 5 is composed of their GOknit technology which is mean to promote breathability and still be comfortable. It has a sock like fit from an interior perspective with an integrated support strap. It is honestly very similar to a lot of the triathlon shoes and the quick fit loop on the heel only seeks to enforce this. Additionally, the tongue is also mesh, but is also strapped in position so you never have to worry about any movement. Honestly, I think most tri folks will love these.

Construction: Midsole
The mid on the GOrun 5 uses their custom 5GEN cushioning which while still EVA based is built to be more responsive. There is a mid-foot strike zone which should help with the heel to toe transition proving a more balanced transition of energy. It’s definitely got a little cushion, but is also plenty responsive for additional speed.

The outsole uses a parametric design in terms of the layout of the contact points. Like many similar shoes, Skechers has placed reinforced lugs at spots that see the most wear and additionally require the most traction. Overall it works well, grips decently, and wear pattern is relatively in line with other competitive offerings.

Visually, the GOrun 5 is not my favorite in the Skechers lineup. I definitely gravitate to the GoMeb Razor which comes in is a really interesting competitor within the same family and you can read that review as well. Some of the rules that Skechers are breaking are also about breaking from typical running shoe aesthetics. For instance, the whole tab on the heel is honestly totally unnecessary. I get the reasoning behind it and again it’s an attempt at innovation, but in my mind just not needed for most of us. The lacing system has been done a lot and again, that’s more of a personal thing, but I also feel somewhat unnecessary. The color palette choices are very primary, so there isn’t a lot of variation between each suicide from its primary color. This isn’t bad, but not a lot of fun and again I lean towards the clever pallets done with the Razor. However, the marathon specific versions Skechers has done have been very nice and I may even suggest checking those out. Overall, I’d love to see them add contrast color to the shoes to get a little more flavor.

Running in the GOrun 5 will take some getting used to. This is primarily due to the fact that they are much lighter than something you have probably ever worn before. Mentally, you may not think you are getting the cushioning, structure, or support that you need when in reality it’s all there. The first thing I noticed was a faster overall ride, but you also get a pretty solid amount of cushioning. It definitely lacks some structure in the upper, the shoe is very similar to others, especially in the triathlon market. The GOrun 5 sticks directly with the synthetic upper and while it’s comfortable, you’re not going to get a lot of support on top. The shoe definitely skews towards faster and more aggressive runners.

That being said, I think that was Skechers intention all along. The GOrun 5 is a speed to mid-level performance runner and they also offer other models on both sides as well. I think a 6 to 8 minute runner will do really well in the GOrun 5 and slower runners may have to try it for a bit to see if they can handle it. For me, it’s a fast light shoe and I would target it for use on my speed days.

Overall, this is yet another example of Skechers stepping up in the market and screaming that they are a real player. Just like I said with the GoMeb Razor, the GOrun 5 is hampered by preconceived notions when in reality, they are some of the strongest running shoes on the market. It’s actually a bummer that they get the rap they do because at their price points, they are bringing better quality and even more innovative running shoes to a broader mix of people. If you are still doubting on Skechers, and then try them out. Just give them a chance and see what you think, but go in with an open mind.