The word “vacation” usually conjures up images of far-off lands, mountains or beaches, maybe a little alcohol and good food, but in my case there is this realization that goes along with it that there is this event looming. So just as I have hit my stride with the training, I then remember our family trip to Ireland and Scotland is coming up and I don’t want to lose that time and end up a few weeks later with a bit of a reset. The thing is, I’ve never really trained all that hard before while traveling. Sure, I’ve done little runs here or there, but nothing to keep me truly in race condition. I typically always come home a couple pounds heavier and need a little time to work the legs out, but that is not an option here. And did I mention Ireland and Scotland… you know, land of whiskey, beer, soda bread, meat and potatoes. Let’s just say I was a little nervous going in as to how this would work out.

First off, I had to recognize what I could and could not do on our trip. Swimming and cycling would not be in the cards given we would not be near any sort of swimmable water and I wouldn’t have a bike with me or access to a rental. That left me with running and some amount of strength training I could handle in the hotel room. The climate is a lot like the Pacific Northwest so I needed to plan accordingly for the weather to be all over the place. Thankfully, Zoot had provided me with some pretty versatile gear and it fit in perfectly for the trip.

For tops, I took Zoot Surfside short sleeve tees, figuring I could layer with a wind jacket if necessary and they tend to dry quickly. Note, I always made sure to have two of everything to give ample time for the other to dry. For bottoms, I took the Zoot PCH 6” shorts and a pair of their Pulse tights from last season which I just love the feel of. They aren’t too heavy which makes them a really solid choice for those strange mid range temperatures. I also brought along Etherwind jacket to handle wind and water, of course several pairs of socks, and also a running hat. As for the shoes I have been running a lot in the new Zoot Solana, but I knew I would face some off weather so I took the Solana ACR when you’re tested prior. This provided me with wet weather protection and also gave me a little more protection if I had to get onto any trails. I also take along a pair of Genetyk sunglasses from Rudy Project which I’ll write more about it in a separate review, but those were really for eye protection and glare. That was my gear list. 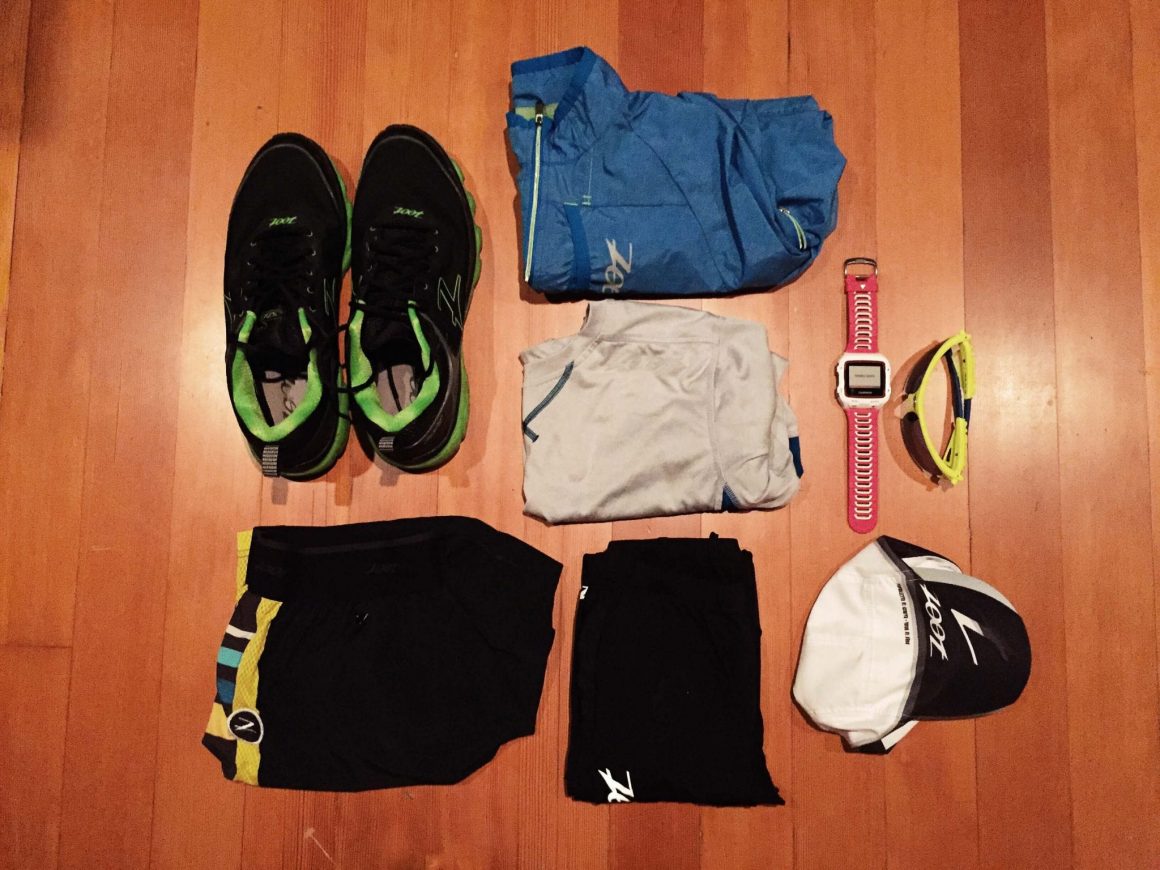 In terms of packing that all fit into one small cube. I’ve got big feet, so the shoes took up a bit more, but my wife had plenty of room so all is well. I was ready to go.

Putting Yourself Out There

My first run was in the small town of Kinsale on the southern coast of Ireland, just outside Cork. The location isn’t dramatically important other than to know there aren’t a lot of runners there. So you have this very strange mental state you go through where you feel weird for exercising when nobody else is. I didn’t want to wait too long though before my first run and honestly thought it might help with the jet lag, so I decided to tackled it my first morning there.

I made mental notes as we walked the village the night before for potential routes, but the town is very very small. So before bed, I loaded up Strava and just clicked my way through several different route options. The next morning when I took off, I pretty much knew exactly where I was going and there were a lot of ways to get lost believe me. In terms of the people, I did get a lot of looks, but it only took me a few minutes to realize that just like in the States most of those looks are out of respect. Because regardless of your size or your shape, when somebody sees you put yourself out there and sees you exercising and really going for it, there is this tinge of admiration that exists. They may not even be an athlete, but they can understand how hard what you’re doing is at some level. So any weirdness I had felt was gone because for the most part I felt like the people were more impressed than amused. It kind of made me feel like I was a real athlete, see gratuitous post run photo below.

Oh The Sites You Will See

If you take nothing else away from this article, then this should be the one thing you get from it. You will simply be amazed by what you see or what you find when you get outside your comfort zone and go for a run somewhere you’ve never been. That first day, I found myself running across a cobblestone causeway onto a random trail that took me by an abandoned fort (James Fort) with a view back of the entire little fishing village I had just left. It was surreal and it made any thoughts I had of physical pain diminish almost instantly. I simply ran better because of where I was, kind of like my curiosity just kept me moving.

That same feeling resurfaced continually throughout vacation. As I left our B&B in Dingle, I headed straight out into the country onto these little one lane roads with no cars. I was talking to cows as I ran by wishing them all a top of the morning and laughing at myself and my new acquaintances. The sheer simplicity of the moment and the beauty that was around me was almost palpable.

In Galway (top image), I found myself headed toward the resort town of Salthill which is on the coast just outside of town. On one side was a golf course (of course), but on the other side in the frigid waters of the Atlantic I watched an 80-year-old woman with a cane hobble down to the water in her Speedo swimsuit and hop in to join other swimmers in training. THAT water was insanely cold and I instantly felt humbled.

In Edinburgh, Scotland, I ran to the top of Arthur’s Seat and then bombed down into the numerous trails of Holyrood Park. The views from the top were incredible, but I didn’t want to stop because there was just more to see. In Dublin I ran the city, and then out of the city center past the zoo and into her one of the largest public parks in the world, Phoenix Park. For a while, it was just me and the many wild deer that roam the park, but keep in mind I was only a few miles from town. It was totally surreal.

One note, I did this every morning early, before everyone else was up. So even though this was vacation and you want to sleep in, this made me get up and start my day and really enjoy the amount of time I had even more. When I got back, I would quickly shower and join the family for a traditional breakfast and I could enjoy it even more knowing I put my hours in.

After this trip, I can safely say my running gear now goes with me everywhere I go. After the triathlon is over, I’m headed to Japan for a week and already I’m trying to figure out where I can run there (Arashiyama Bamboo Forest here I come). I feel like it changed me and that it gave me a more intimate experience with the place I was visiting. I saw things I would never see had I stayed in the car, hopped on a train or just relied on walking the city. So take that gear with you, get out and run when you’re traveling and then enjoy the food and the whiskey. I sure did.

Best Ways to Stay Sane, Keep Your Training Up, and Run Solo

Fastest Running Shoes, the Battle for Number One